Jack McGee net worth: Jack McGee is an American actor who has a net worth of $750 thousand dollars. Jack McGee was born in South Bronx, New York in February 1949. He is the youngest of eight children and was class president in high school. Jack became a New York City Firefighter to help him get into acting.

He made his acting debut in the 1985 firefighter film Turk 182. McGee has almost 200 acting credits to his name. He starred in the television series Space Rangers from 1993 to 1994 and The Huntress in 2001. He had a recurring role in the TV series NYPD Blue from 1993 to 2002. In 2010 he starred as Hickey in the TV series Players and in 2012 he starred as Captain Sutton in the series Common Law. McGee has starred in the movies Scrooged, Lethal Weapon 2, Born on the Fourth of July, The End of Innocence, Crash and Burn, The Doors, Backdraft, Basic Instinct, Lethal Weapon 3, Miracle on 34th Street, Jury Duty, Showgirls, Jungle 2 Jungle, Breakdown, Chairman of the Board, The Flintstones in Viva Rock Vegas, Coyote Ugly, The Man Who Wasn't There, Legally Blonde 2: Red, White & Blonde, and The Fighter. McGee will be a part of the new CBS sitcom The McCarthys. He has won awards from the Boston Society of Film Critics, Broadcast Film Critics Association, and Central Ohio Film Critics Associations. He was also nominated for a Screen Actors Guild Award in 2011. 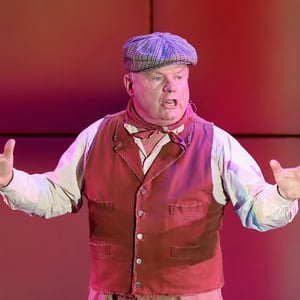