J.K. Simmons Net Worth and Salary: J.K. Simmons is an American actor who has a net worth of $20 million. After establishing himself as a television actor, Simmons gained prominence in Hollywood for appearing in films like Sam Raimi's "Spider-Man" trilogy, "Whiplash," and many others. Today, J.K is considered one of the entertainment industry's best character actors, and he has won a number of awards over the years.

After appearing in "Whiplash," Simmons won Best Supporting Actor at the Academy Awards, the Golden Globe Awards, the Screen Actors Guild Awards, the Critics' Choice Awards, and the BAFTA Awards. Simmons has also established himself as a talented voice actor, appearing in a range of animated movies, commercials, and video games. In addition, J.K. has booked roles in a number of Broadway productions over the years.

Early Life: Jonathan Kimble Simmons was born on January 9th of 1955 in Grosse Pointe, Michigan. Initially, raised in a suburb of Detroit alongside two siblings, Jonathan relocated with his family to Worthington, Ohio at the age of 10. During his high school years, Simmons participated in drama, football, and choir. At the age of 18, he relocated to Missoula Montana with his family, as his father had landed a job as the new Director of the School of Music at the University of Montana.

After graduating from high school, Simmons attended the University of Montana, where he studied music. During his college years, he became a member of a music-oriented fraternity before graduating with a music degree in 1978. Despite his interest in music, Jonathan also harbored a passion for acting. After leaving university, he moved to Seattle and joined the Seattle Repertory Theatre. This helped him become established in the acting world, and it led to his first Broadway role in 1992.

Career: That Broadway debut in 1992 was in "Guys and Dolls," in which Simmons played Benny Southstreet. Prior to this role, he had appeared in television shows such as "Popeye Doyle" and "All My Children." In the early 90s, Simmons also booked a major recurring role in "Law & Order" as Dr. Emil Skoda. He eventually reprised this role in two out of three of the show's spin-offs. During this period, Simmons continued to perform in Broadway plays such as "Birds of Paradise" and "Peter Pan," playing Captain Hook in the latter production.

After playing a neo-nazi in the prison drama "Oz," Simmons appeared in the film "3: The Dale Earnhardt Story" as the father of Dale Earnhardt. He then continued his run of playing police characters in "The Closer" before booking another role in the series "Raising Hope." Further roles came with "Arrested Development and "The Adventure of Pete & Pete."

After notable performances during the early 2000s in films like "Thank You for Smoking" and "Juno," Simmons landed one of his most noteworthy roles in Sam Raimi's "Spider-Man" films as J. Jonah Jameson, the editor-in-chief of the Daily Bugle. This moment birthed the popular internet meme that involves Peter Parker being asked for payment in advance, and J.K Simmons giving a characteristic laugh.

In 2008, Jonathan followed up with another role in "Burn After Reading," this time playing a CIA agent. He then appeared in films such as "Postal" and "I Love You, Man." Throughout the next few years, Simmons established himself as a voice actor in the animated stop-motion series "Robot Chicken" During his time on this show, J.K. voiced a multitude of characters.

Due to his friendship with Jason Reitman, Simmons has starred in many of the director's films, including "Up in the Air" and "Jennifer's Body." In 2012, he voiced the character of Tenzin in "The Legend of Korra." After appearing in "Growing Up Fisher," Simmons voiced another character in the Disney XD series "Gravity Falls."

A major accomplishment for J.K. Simmons came when he played the character of Terence Fletcher in "Whiplash." His character was a strict conductor at a fictional music school who bullies his students. Due to his performance, Simmons won a number of awards, including an Academy Award for Best Supporting Actor.

In 2016, Jonathan voiced characters in animated films such as "Kung Fu Panda 3" and "Zootopia." Over the years, he has voiced the role of Jonah J. Jameson on almost countless occasions – in satirical comedies, video games, and various other forms of media. Simmons is also known for voicing the character of the yellow M&M, and he has appeared in a variety of other commercials.

Real Estate: In 2009, it was reported that J.K. Simmons was in the process of selling his home in Hollywood Hills. At this point, he had cut the price down from $1.995 million to $1.795 million. The five-bedroom, contemporary-style home features 4,190 square feet of living space, and it is located on a 0.63-acre lot on a private street next door to former Pussycat Dolls member Nicole Scherzinger. Additional features include vaulted ceilings, hardwood floors, three fireplaces, and a customized three-car garage. Simmons originally purchased the property back in 2003 for $1.45 million. Eventually, Simmons and his wife managed to sell the home for $1.585, taking home a small profit.

In 2016, it was reported that Simmons was selling another Californian home in Del Mar. The 6,681-square-foot residence features 5 bedrooms and two detached guesthouses. He had only purchased the home one year prior for $3.94 million, but it seems that J.K. Simmons quickly decided to flip the property for a profit, listing the residence for a price of $4.495 million.

Located on a 1.63-acre plot of land north of Downtown San Diego and a short distance from the beach, the expansive compound features a poolside casita and a 1,387-square-foot poolside guesthouse with a dining room and Art-deco-inspired kitchen. Features in the main house include beige limestone flooring, a brushed nickel fireplace, and a domed ceiling with a hand-painted mural. Outside, there is a flagstone-paved bridge over a small creek, a saltwater swimming pool, a color-wheel waterfall, a zen garden, a fruit orchard, a tennis course, and a jogging trail.

Simmons and his wife continue to own a spacious and inconspicuous home in Studio City, which they purchased in 2009 for $2.5 million. The residence spans 6,480 square feet and sits near a cul-de-sac in a quiet neighborhood. 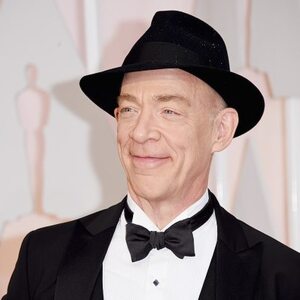