Iwan Rheon net worth: Iwan Rheon is a Welsh actor, musician, and singer who has a net worth of $4 million. Iwan is perhaps best-known for playing Ramsay Bolton on the series Game of Thrones. He appeared in 20 total episodes of the series between 2013 and 2016. In 2019 he starred as Mick Mars in the Motley Crue biopic The Dirt.

Iwan Rheon was born in Carmarthen, Carmarthenshire, Wales in May 1985. As an actor he starred as Daniel in the television series Caerdydd in 2006. From 2009 to 2011 he starred as Simon Bellamy in the TV series Misfits. From 2013 to 2016 Rheon starred as Ash Weston in the series Vicious and as Ramsay in the television series Game of Thrones. He has had recurring roles in the TV series Smurf in 2014 and the TV mini-series Residue as Jonas in 2015. Rheon has also starred in the movies Resistance, Wild Bill, The Rise, The Liberator, and Residue. He has appeared in episodes of the TV series Coming Up, Secret Diary of a Call Girl, Misfits Erazer, and Grandma's House. Rheon was nominated for a Screen Actors Guild Award for Outstanding Performance by an Ensemble in a Drama Series for Game of Thrones in 2014. Rheon was the lead singer of the band The Convictions. His debut solo album Dinard was released in 2015. 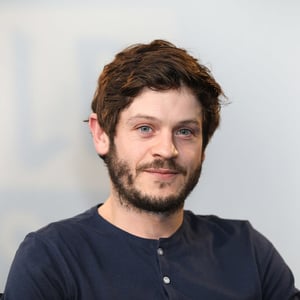