Isabel Preysler Net Worth: Isabel Preysler is a Filipina socialite and television host who has a net worth of $30 million. Isabel Preysler was born in Manila, Philippines in February 1951. As a youth she modeled in local beauty pageants and charity events for the Sheraton Hotels and resorts in Manila.

She won titles in several events and migrated to Madrid, Spain at 16 to study at Mary Ward College. She worked for Spanish magazine !Hola! as a journalist in 1970 and her first interview was with her future husband Julio Iglesias. She hosted the lifestyle TV show Hoy en Casa in 1998. Preysler served as Prince Charles' guest of honor at the opening of his Spanish Garden at the Chelsea Flower Show in 2001. She became close friends with Victoria Beckham and served as Spain's welcoming host for the couple. Isabel is the national spokesperson for Suarez jewelry, Manolo Blahnik shoes, Ferrero Rocher, Chrysler, and Porcelanosa. She has been honored with the Women Together Award in 2006. Isabel married Julio Iglesias in 1971 and the couple had three children before divorcing. She is married to Miguel Boyer and was formerly married to Marques de Grinon and has a total of five children, including pop star Enrique Iglesias. 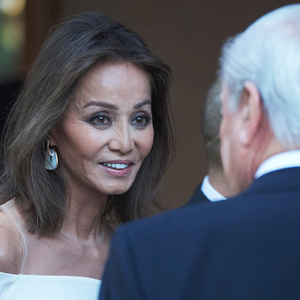