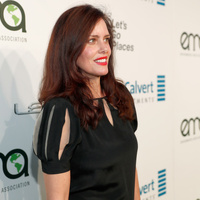 Ione Skye net worth: Ione Skye is a British-American actress who has a net worth of $2 million. She became a teen idol after the 1989 movie, Say Anything…, and over the years she has appeared on numerous movies and television shows. She was born Ione Skye Leitch in Hertfordshire, England on September 4, 1970. She is the daughter of folk musician Donovan and model Enid Karl. Skye was brought up in Los Angeles, San Francisco, and Connecticut. She made her debut in films in the movie River's Edge in 1986 and went on to appear in The Rachel Papers, Say Anything…, Covington Cross, Samantha, and Zodiac. In addition to her work in films, she has also appeared in a number of television shows including The Twilight Zone, Life as We Know It, Arrested Development, Private Practice, Covington Cross, and The Fearing Mind. Skye is a practicing Buddhist and is also a painter. She wrote a children's book called, My Yiddish Vacation that was published by Henry Holt and Company in May of 2014. She has been married twice, first to Adam Horovitz, a member of the Beastie Boys, and more recently to Australian musician, Ben Lee. Skye and Lee have a daughter named Goldie Priya Lee, who was born on September 24, 2009.