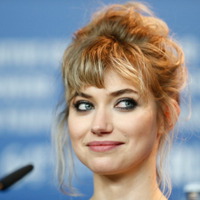 Imogen Poots Net Worth: Imogen Poots is an English actress who has a net worth of $2 million. Imogen Poots was born in Hammersmith, London in June 1989. She is best known for her role in the movie 28 Weeks Later. She attended an improvisation workout at the Young Blood Theatre Company. Her first TV role came in the TV series Casualty in 2004 and her first film role came in the movie V for Vendetta in 2005. In 2007 Poots starred as Tammy in the film 28 Weeks Later. She has starred in the movies Me and Orson Welles, Solitary Man, Cracks, Waking Madison, Centurion, Chatroom, Jane Eyre, Fright Night, Comes a Bright Day, Greetings from Tim Buckley, A Late Quartet, The Look of Love, All Is by My Side, Filth, That Awkward Moment, A Long Way Down, and Need for Speed. She was nominated for Most Promising Newcomer at the British Independent Film Awards in 2007 and won a British Independent Film Award in 2013 for Best Supporting Actress. She also won an award for Breakthrough Performer at the Hamptons International Film Festival in 2012.