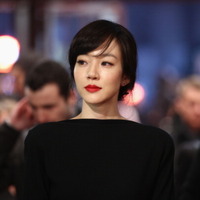 Lim Soo-jung Net Worth: Lim Soo-jung is a South Korean actress who has a net worth of $20 million. Lim Soo-jung was born is July 11, 1979 in Gangnam District, Seoul, South Korea. Lim Soo-jung modeled for teen magazines early in her career. Her acting breakthrough came in Kim Jee-woon's horror film A Tale of Two Sisters (2003), followed by the popular television drama I'm Sorry, I Love You (2004). She has since appeared in numerous films, most notably Park Chan-wook's I'm a Cyborg, But That's OK (2006), Hur Jin-ho's Happiness (2007), Lee Yoon-ki's Come Rain, Come Shine (2011) and Min Kyu-dong's All About My Wife (for which she won Best Actress at the 33rd Blue Dragon Film Awards). She began shedding her former image by taking on more adult roles, notably among them were Hur Jin-ho's romantic melodrama Happiness, Choi Dong-hoon's blockbuster fantasy Jeon Woo-chi: The Taoist Wizard, romantic comedy Finding Mr. Destiny and Lee Yoon-ki's minimalist breakup indie Come Rain, Come Shine. For her performance in All About My Wife, Lim Soo-jung took home the Best Actress at the Blue Dragon Film Awards and the Women in Film Korea Awards. Lim Soo-jung and Lee Jung-jae played two artists in a post-apocalyptic environment in the short film El Fin del Mundo (The End of the World), which screened at the prestigious contemporary art exhibition dOCUMENTA. She also acted opposite veteran Thai actor Sorapong Chatree in Aditya Assarat's short film Phuket, which was commissioned jointly by the Ministry of Foreign Affairs and the Association of Tourism and Hotel Operators of Phuket. She is currently managed by KeyEast. In 2014, Lim Soo-jung finished filming Secret Temptation, a remake of British crime thriller Woman of Straw which was partly shot in Macau, China.