What was Humphrey Bogart's Net Worth?

Humphrey Bogart was an American film actor who had a net worth of $5 million at the time of his death in 1957. That's the same as around $50 million today after adjusting for inflation. Humphrey Bogart became famous for his performances in classic Hollywood films like "High Sierra," "The Maltese Falcon," and "Casablanca." Bogart was also an original member of the "Rat Pack," which included Lauren Bacall, Frank Sinatra, Judy Garland, Sid Luft, Mike Romanoff, David Niven, Angie Dickinson, and more. Hogart was named the Greatest Male Star of All Time according by the American Film Institute.

In 1948 Humphrey started his own production company, Santana Productions. Santana went on to release several films through Columbia Pictures including "Knock on Any Door," "Tokyo Joe," "In a Lonely Place," "Sirocco," "Beat the Devil," and "The Family Secret." He sold the company to Columbia in 1955.

Bogart died of esophageal cancer on January 14, 1957 in Los Angeles, California. He was buried in Forest Lawn Memorial Park in Glendale. During his career he received the Academy Award for Best Actor for "The African Queen."

Bogart was born on December 25, 1899 in New York City. He was the eldest child of Belmont DeForest Bogart and Maud Humphrey. His father was a cardiopulmonary surgeon while his mother worked as a commercial illustrator before becoming the art director of the fashion magazine "The Delineator." He had two younger sisters – Frances and Catherine – and has described his childhood as straightforward and unemotional. He attended Delancey School nad then Trinity School before being admitted to Phillips Academy, a boarding school which his parents hoped would help him get into Yale University. However, Bogart only spent a semester at Philips before leaving as he was failing most of his classes and was getting into trouble at school.

Following his failure at school, Bogart enlisted in the United States Navy in 1918 during Warld War I. He spent over a year in the service before leaving in 1919 in the rank of Boatswain's Mate Third Class. He then returned home and started working an office job as a film company and soon began taking small roles in various on-stage productions.

His modest roles in film and theater grew steadily throughout the 1920s, though much of his early theater work dropped off sharply following the Wall Street Crash of 1920. He then headed for Hollywood to begin taking larger film roles. He signed a contract with the Fox Film Corporations for $750 a week. In 1930, he starred in "Up the River" along with friend and actor Spencer Tracy. A year later, in 1930, he had a role in "Bad Sister" along with Bette Davis. He continued traveling to New York to do the occasional theater production as well and starred in the 1934 Broadway production of "Invitation to a Murder." His performance was well-reviewed by critics and helped further solidify his acting career. He then was offered the role in "The Petrified Forest," which also did well and was turned into a film, which Bogart also starred in, making him a true Hollywood star.

However, despite his early success, Bogart began to be typecast as a gangster in a number of small production crime dramas films produced by Warner Bros, with whom he had a $550 per week 26-week contract. He was also often overshadowed by the leading men at Warner Bros – James Cagney and Edward Robinson – who often got the more interesting and diverse film parts. However, eventually Bogart began to land larger and more leading man style film roles.

In 1941, he starred in "High Sierra" and "The Maltese Falcon." The latter film become a commercial hit and major triumph for Bogart, who stated later that he was proud of his work in the movie. In 1942, he landed his first romantic lead in the film "Casablanca," which also went on to be very popular and has since become a classic. It won the Academy Award for Best Picture at the 16th Academy Awards in 1943 and Bogart received a nomination in the category of Best Actor in a Leading Role. Following the film, he more than doubled his annual salary and became the world's highest-paid actor. 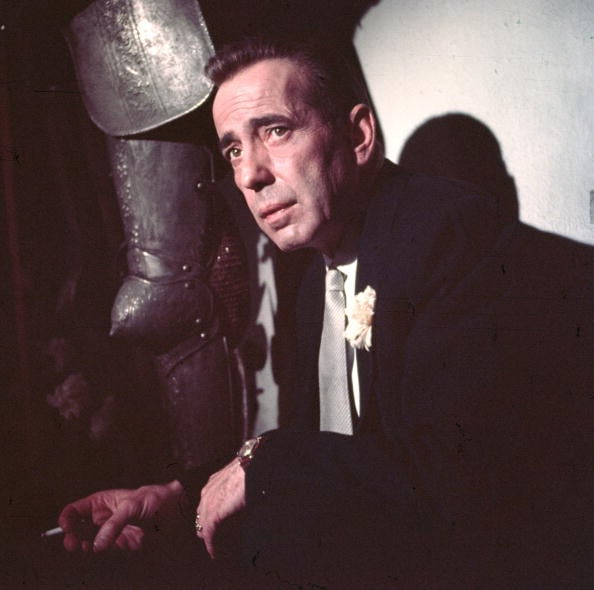 In 1944, Bogart was introduced to actress Lauren Bacall. The two would go on to star in a number of films together in addition to striking up a romantic relationship. They appeared in "To Have and Have Not" in 1944, a loose adaptation of the Ernest Hemingway novel. Two years later, they appeared in "The Big Sleep" in 1946 which was successful with audiences but received mixed reviews by critics. In 1947, the acted in "Dark Passage," a suspenseful crime film, and then in their last film together, "Key Largo," in 1948.

Outside of his work with Bacall, Bogart continued acting in other films. He appeared in "The Treasure of the Sierra Madre," which received an Academy Award for Best Director, in 1947. He also created his own film company, Santana Productions, in 1948, which released the majority of its films through Columbia Pictures. Some of those films include "Knock on Any Door," "Tokyo Joe," and "In a Lonely Place," all starring Bogart.

In 1951, he appeared alongside Katherine Hepburn in "The African Queen." The film involved a difficult four-month long shoot in the Belgian Congo. His performance earned him the Academy Award for Best Actor in 1951 and is considered one of his best. Some of his final roles include "Sabrina" in 1954 and "The Barefoot Contessa."

Bogart was married four times throughout his life, first to Helen Menken in 1926. They divorced in 1927. A year later, he married Mary Philips and they remained together until 1937. He then pursued a relationship with Mayo Methot until their divorce in 1945, in large part prompted by his affection for Lauren Bacall, whom he married in 1945. They remained together until his death. Bogart had two children with Bacall, Stephen and Leslie.

Bogart developed esophageal cancer at the end of his life, possibly due in part to his heavy smoking and drinking habits. The cancer had metastasized by late 1956 and he lapsed into a coma a few weeks after his 57th birthday, dying soon afterward. He was cremated and interred in Forest Lawn Memorial in Glendale, California. In 1960, he received a star on the Hollywood Walk of Fame. 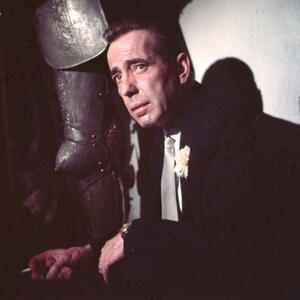