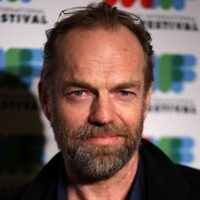 Hugo Weaving Net Worth and Salary: Hugo Weaving is a British actor who has a net worth of $25 million. Although Weaving is British, he has strong Australian roots and grew up in the "down under" after his family settled there in the 70s. Hugo is famous for a wide range of memorable roles and has starred in some of the biggest franchises of all time. These include the Matrix trilogy, the Lord of the Rings films, the Hobbit films, Marvel movies, and many others.

After getting started with Australian television series in the 80s, Weaving began to appear in a range of films throughout the 90s. During his career, Hugo has won a number of awards. These include a Satellite Award, an MTV Movie Award, and six Australian Film Institute Awards. Today, he is one of the most recognizable faces in Hollywood.

Early Life: Hugo Wallace Weaving was born on April 4th of 1960 in Ibadan, Nigeria. Born to British academics, Hugo relocated to the United Kingdom when he was one. During this period, he lived in Bedford and Brighton before moving once again to Australia. After living in Melbourne and Sydney for a stretch, Hugo moved to Johannesburg in South Africa before returning to England once more. While attending school in England, Weaving got involved with acting for the first time with a stage production.

Weaving's family moved back to Australia in 1976, and this time they settled long enough for Hugo to lay down roots. He attended grammar school in Sydney before enrolling at the National Institute of Dramatic Art (NIDA). After graduating in 1981, Hugo began to pursue a career as a professional actor.

Career: Weaving's first major role came in 1984 when he joined the cast of the TV series "Bodyline." Further roles came with Australian series such as "The Dirtwater Dynasty" and films like "Barlow and Chambers: A Long Way From Home." By the end of the 80s, he was starring opposite Nicole Kidman in the film "Bangkok Hilton" and winning his first Australian Film Institute Award for the low-budget flick "Proof." At the beginning of the 90s, Weaving showed his range with roles in comedic films like "Reckless Kelly" and "Priscilla, Queen of the Desert."

One of Weaving's first big moments on the international stage came in 1995 with the film "Babe." Hugo provided the voice for Rex the sheepdog, and in 1998 he reprised his role in the sequel "Babe: Pig in the City." He then earned critical praise for his performance in the film "The Interview."

During the next period, Weaving appeared in films like "Everything Goes," "Little Fish," and "V for Vendetta." More voice acting roles followed in the video game "The Lord of the Rings: The Battle for Middle-Earth II," and in the 2007 film "Transformers." A supporting role followed in 2010 with "The Wolfman" before Weaving followed up with "Last Ride."

In 2011, it was confirmed that Weaving would reprise his role as Elrond in "The Hobbit" movies. Weaving spent time doing theatre work in Australia with productions like "God of Carnage" and "Uncle Vanya." He also appeared in the Australian TV show "Rake" during this period. Weaving returned to blockbuster stardom in 2010 after winning the role of Red Skull in "Captain America: The First Avenger."

Red Skull Salary Negotiations: In 2020, Hugo revealed that he did not return to the Marvel Cinematic Universe as Red Skull because of a breakdown in salary negotiations. According to Weaving, Marvel wanted him to reprise his role in "Avengers: Infinity War" and "Avengers: Endgame," but they were offering him less than what he originally made in "Captain America: The First Avenger." And just to make it clear, the contract they were offering was for two films – not one.

This was a strange turn of events, mainly because actors in the Marvel Cinematic Universe are typically offered higher salaries with subsequent reprisals of their original roles. It seems dumbfounding that Marvel would stoop so low and offer an established actor like Hugo Weaving such an insulting contract. Fortunately for Weaving, he actually didn't even want to play Red Skull again, and he expressed as much in an interview back in 2011.

Relationships: Since 1984, Hugo Weaving has been in a long-term relationship with his girlfriend, Katrina Greenwood. Over the course of their relationship, the pair have had two children together.

Health Concerns: Hugo Weaving has epilepsy, a condition that he was made aware of during his early teens. Although he completely stopped having seizures after the age of 18, Hugo chooses not to drive for safety reasons.

Other Ventures: Outside of acting, Weaving is strongly passionate about animal rights in Australia. He serves as an ambassador for an animal protection organization called Voiceless.

Highest Grossing Box Office Actors: Having appeared in several of the biggest movie franchises of all time Hugo Weaving's career has generated enormous box office returns. As of this writing his box cumulative box office total is $8.7 billion. That's enough to make him one of the 30 highest-grossing actors of all time in terms of box office totals.