Heidi Swedberg net worth: Heidi Swedberg is an American actress and musician who has a net worth of $300 thousand. She is best known for playing the recurring role as Susan Ross on the television series Seinfeld.

Heidi Swedberg was born in Honolulu, Hawaii in March 1966. Swedberg studied at the Actors Theatre of Louisville. She starred as the fiancé of George Costanza, Susan Ross, on Seinfeld from 1992 to 1997. Swedberg has starred in the movies In Country, Too Much Sun, Welcome Home, Roxy Carmichael, Kindergarten Cop, Hot Shots!, Up Close & Personal, Galaxy Quest, 75 Degrees in July, Dragonfly, Jumping for Joy, and Moving Alan. She has also appeared in episodes of the TV series Matlock, Thirtysomething, Quantum Leap, Northern Exposure, Sisters, Roc, Empty Nest, Murder, She Wrote, Star Trek: Deep Space Nine, Grace Under Fire, Touched by an Angel, Roswell High, Providence, ER, Gilmore Girls, Becker, Without a Trace, Bones, Wizards of Waverly Place, and Hawthorne. She sings and plays the ukulele in her band Heidi Swedberg and The Sukey Jump Band. The band released the album PLAY! in 2009 and My Cup of Tea in 2013. Swedberg also plays with her other band the Smoking Jackets. 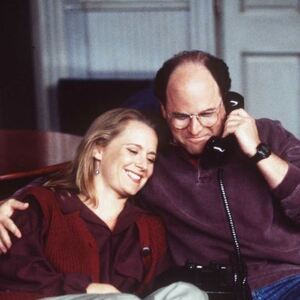