How much is Heather Locklear Worth?

Heather Locklear Net Worth and salary: Heather Locklear is an American actress who has a net worth of $6 million dollars. An actress who has been working since 1979, Heather Locklear is most widely recognized for her roles on "Spin City", "Dynasty", "T.J. Hooker", and "Melrose Place", and her guest starring roles on "Hannah Montana" and "Rules of Engagement". She was born Heather Deen Lockbolear on September 25, 1961, in Los Angeles, California. Heather became one of TV's most bankable stars after appearing on several of Aaron Spelling's most successful series, Melrose Place and Dynasty. Having stunning California blonde beauty looks, Locklear seemed to be the perfect choice for playing Sammy Jo Dean Carrington on Spelling's glitzy primetime soap opera "Dynasty" (ABC, 1981-89). It was this role that exploded Heather into the mainstream. She also appeared on another Spelling production, "T.J. Hooker" (ABC 1982-85; CBS 1985-86). Already having acquired a loyal fan base, she did her benefactor a return favor when she joined Spelling's then-floundering romantic melodrama "Melrose Place" (Fox, 1992-99), as the scheming ad-exec, Amanda Woodward. Almost as differing and amusing as her onscreen exploits was Locklear's much-scrutinized love life, which included high-profile marriages to rock stars like Tommy Lee and Richie Sambora. She has only one child though, a daughter named Ava Sambora with her latest ex-husband Richie. Locklear also appeared on the Michael J. Fox sitcom "Spin City" (ABC, 1997-2002). Although Locklear could be occasionally seen in some feature film efforts, mainly in romantic comedies like "Uptown Girls" (2003) and "The Perfect Man" (2005), they have never lived up to her phenomenal success on TV where she was regarded for decades as America's favorite vixen.

Heather lives in an 8000 square foot, 4-acre mansion in Thousand Oaks, California that was deeded to her by Tommy Lee after their divorce in 1993. The couple built the 6 bedroom, 7.5 bathroom house in 1990 during better times. Today the house is estimated to be worth $5 million. 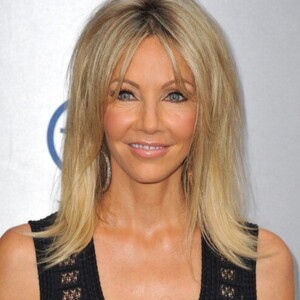