What is Heather Dubrow's net worth?

Heather Dubrow is an American reality star who has a net worth of $50 million dollars. The majority of her net worth actually is derived from her husband, plastic surgeon Terry Dubrow. Heather was on the television series "That's Life" in 2000 and on "The Real Housewives of Orange County" from 2012 to 2016. She joined the main cast of the seventh season of Bravo's first Real Housewives franchise.

Heather Paige (Kent) Dubrow was born on January 5, 1969, in the Bronx. She grew up in Chappaqua, New York. She is a fifth-generation American of Jewish ancestry from Germany, Hungary, and Poland. She competed in beauty pageants as a teenager and was named Miss Greater Syracuse in 1989. The following year, she won the title of Miss Congeniality at the Miss New York State Pageant. She graduated from Syracuse University in 1990 with a BFA in Musical Theatre.

When Heather first moved to L.A. to pursue an acting career, she worked as a performer, singing at the Golden Horseshoe Jamboree at Disneyland. did meet a guy there and together they put together a 14 piece band and started touring. For four years, Heather toured with the band as its lead singer opening for artists such as Mel Torme, Manhattan Transfer, and Dana Carvey.

From 2000 to 2002, she starred in the CBS television drama That's Life as Lydia DeLucca. She also performed the show's theme song, "Learnin' As I Go," used in the second season. She also appeared on Married with Children, Nowhere Man, Men Behaving Badly, Life with Roger, Jenny, Early Edition, Stark Raving Mad, and Surviving Suburbia. She left acting for a number of years to focus on raising her four children.

She was brought into the cast of The Real Housewives of Orange County after befriending cast member Tamra Judge and she generally gets along with everyone, though she occasionally butts heads with fellow cast members for being so buttoned up. Dubrow appeared on The Real Housewives of Orange County from 2012 t0 2016. She reportedly left the show after a series of explosive encounters with then-new Housewife Kelly Dodd. Their drama continued off the show, with Kelly secretly filming Heather outside of a fitness studio, which she posted to her Instagram Story in 2019.

She returned to her acting roots, while still trying to balance her work and family life, and can be seen in episodes of Malibu Country, Hot in Cleveland, Young & Hungry, and Hawaii Five-0. Some of her Real Housewives castmates affectionately call her "fancy pants" because of her lavish lifestyle.

Dubrow has also worked as a substitute co-host of Good Day L.A. and Botched: Post Op.

Heather has her own podcast, "Heather Dubrow's World," which focuses on health, beauty, wellness, travel, parenting, and also talking about Botched and RHOC. On behalf of her podcast, she appeared at SXSW in 2019. New episodes premiere every Friday on PodcastOne. She also has a YouTube channel called Heather's Closet that debuts new episodes weekly. 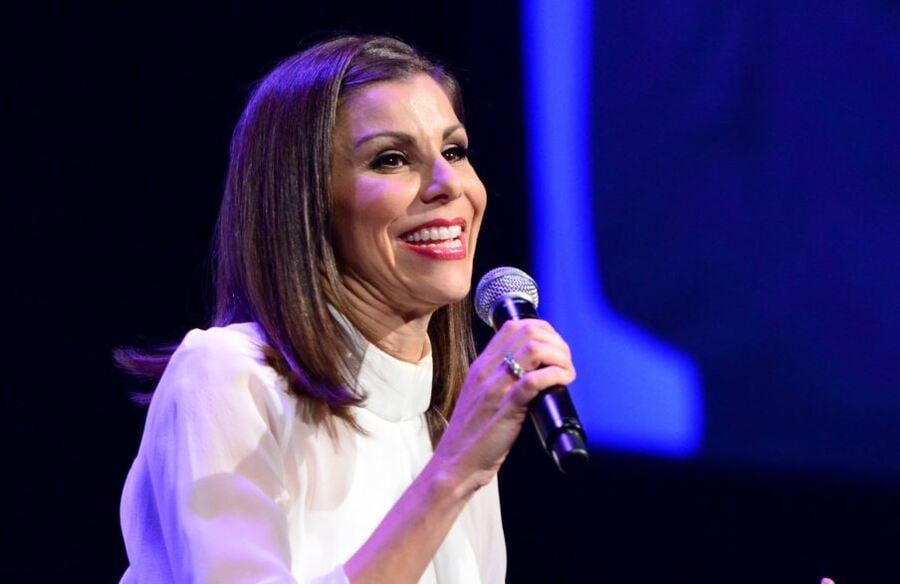 When Heather was 27 years old, she asked a friend, who was a transplant surgeon, if he knew any Jewish doctors that he could introduce her to. She was introduced to plastic surgeon Terry Dubrow via a blind date and while he fell for her right away, she needed a bit more time. When the couple went on one of their first weekend getaways,  as Heather was walking up to the plane, she knew that she wanted to marry Terry. Heather and Terry got married three years later in 1999. They have four children: twins, Nicholas and Maximillia, as well as daughters Katarina and Collette. The family lives in Newport Beach.

Dubrow went to medical school at UCLA and also holds a master's degree from Yale University. He went on to complete a residency in general surgery and was chief resident at Harbor-UCLA Medical Center and he completed his fellowship in plastic and reconstructive surgery at the UCLA Medical Center. Terry Dubrow is board certified by the American Board of Plastic Surgery, and a Fellow of the American College of Surgeons.

Heather's husband is the star of E!'s hit TV series Botched. The show features him and Dr. Paul Nassif as they help people who have had plastic surgeries go wrong. This is far from his first foray into the reality TV genre. He previously starred in Bridalplasty. The show's concept was to have 12 women compete for a wedding and for transformative cosmetic procedures. Dubrow performed the surgeries. The show also only aired for one season. His second TV show was Good Work, a talk show hosted by RuPaul, Terry Dubrow, and Sandra Vergara. The show only aired for a couple of months in 2015. In 2004, he was part of the Fox show The Swan, in which women who were judged to be ugly were given extreme makeovers that included several forms of plastic surgery.

Her husband is the younger brother of rock singer Kevin Dubrow, who was in the heavy metal band Quiet Riot from 1975 until his death from an overdose in 2007.

In 2018, Heather and Terry Dubrow published the book The Dubrow Diet, which promotes a fad diet. Per their website, the diet is "based on cutting-edge and Nobel–prize-winning science that promises not just unprecedented metabolic control, but also an internal cellular rejuvenation with powerful anti-aging effects." The Dubrow Diet is a low-carb diet that uses intermittent fasting to promote weight loss. It emphasizes eating lean proteins, healthy fats, non-starchy vegetables, and fruits.

Terry and Heather have a skincare line developed over the last 15 years called Consult Beaute.

In 2013, Heather and her husband Terry sold their Orange County mansion for a reported $16.4 million dollars, and purchased land in a new community where they are currently built their new dream home. 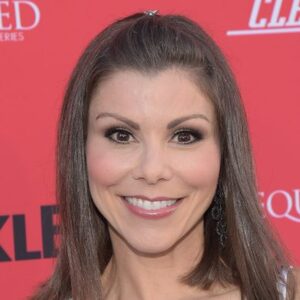