Hayley Mills net worth: Hayley Mills is a British actress who has a net worth of $5 million dollars. Hayley Mills was born in London, England, and was initially focused on a career in dance. She was "discovered" when she was twelve, and shot to international stardom when she was cast as Pollyanna in the hit Disney film, "Pollyanna".

She won the last "Juvenile Oscar" ever presented at the Oscars. From there, she went on to appear in a series of popular films, including "The Parent Trap", "Summer Magic", "That Darn Cat", "The Family Way", "Pretty Polly", "Cry of the Penguins", and "The Kingfisher Caper". As she became older, she began adding television roles to her work, and she has continued to appear in both and film and television projects steadily. Some of her later projects include co-starring, guest-starring, and recurring roles in such television shows as "The Love Boat", "The Flame Trees of Thika", "The Storybook Series with Hayley Mills", and "Good Morning, Miss Bliss". She also appeared in the television movies, "The Parent Trap III" and "The Parent Trap: Hawaiian Honeymoon". 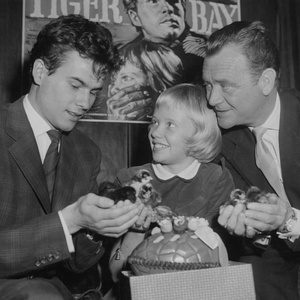