How much is Hayley Atwell Worth?

Hayley Atwell Net Worth: Hayley Atwell is an English actress who has a net worth of $3 million. Hayley Atwell was born April 5, 1982 in London, England. She is best known for her work in stage productions such as A View from the Bridge and in films such as Cassandra's Dream (2007), The Duchess (2008), The Pillars of the Earth (2010) and Captain America: The First Avenger (2011). After graduating in 2005 from The Guildhall School of Drama and Music, Atwell landed a regular role in the miniseries The Line of Beauty (2006). Her first feature film role was in Woody Allen's 2007 film Cassandra's Dream. In 2008, she appeared in the film The Duchess as Bess Foster and the film Brideshead Revisited as Lady Julia Flyte, earning praise and nominations from the British Independent Film Awards and the London Film Critics' Circle Awards. In January 2009, Atwell made her West End début in Lindsay Posner's revival of A View from the Bridge at the Duke of York's Theatre which earned her a Laurence Olivier Award nomination. Atwell appeared as "415" in AMC Television's November 2009 miniseries, The Prisoner, a remake of the 1967–68 series by the same name. In 2010, Atwell starred as Freya Deverell in the successful Channel 4 adaptation of William Boyd's novel Any Human Heart. MTV Networks' NextMovie.com named her one of the Breakout Stars to Watch for in 2011. Atwell also voiced the character in the 2011 movie tie-in video game, Captain America: Super Soldier. She was cast in the 2013 short film Agent Carter and the 2014 film Captain America: The Winter Soldier and will play the role again in the upcoming television series Marvel's Agent Carter as well as the 2015 film Avengers: Age of Ultron. 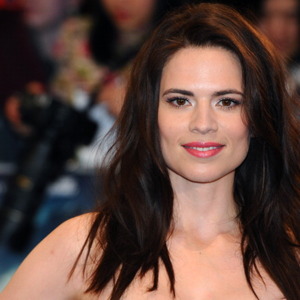