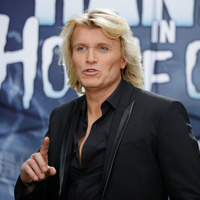 Hans Klok Net Worth: Hans Klok is a Dutch illusionist and actor who has a net worth of $25 million. Hans Klok was born in Purmerend, the Netherlands in February 1969. He got a magic set for his 10th birthday and started performing for friends. Klok became youth champion in the Netherlands at 14 years old and won the Wenegini Prize. Klok and his assistant won the Grand Prix of the Netherlands and the Henk Vermeijden Cup in 1990. At the age of 23 Hans was touring with the Dutch comedian Andre van Duin. Klok performed on the Las Vegas Strip for the first time in 1994 as part of the show NBC's The World's Greatest Magic. He then had a live theater show at the Luxor Theater in Rotterdam. At the beginning of the 2006 FIFA World Cup in Germany Klok made the World Trophy appear out of thin air in a glass cage. In 2007 he had a show at Planet Hollywood Resort and Casino in Las Vegas. Klok set world records for the number of illusions performed in a five minute time period first with 12 and then with 15. As an actor he starred in the short De D van dag and the film Sinterklaas en het geheim van de Robijn. He has also appeared as himself in nearly 50 television shows.