How much is Hannah Simone Worth?

Hannah Simone Net Worth: Hannah Simone is a Canadian television personality, actress, and model who has a net worth of $3 million dollars. Simone was born in London, England in August 1980. From the ages of seven to ten she lived and attended school in three different continents. She started modeling at the age of 13 in Cyprus. Simone graduated from the University of British Columbia and Ryerson University. She worked as a researcher and worked with the United Nations. After she graduated from Ryerson in 2005 she became the host of HGTV Canada's show Space for Living. She worked at MuchMusic as a VJ, news presenter for "Much News Weekly", and hosting The NewMusic. During her time with MuchMusic she interviewed many bands and artists. In 2008 she stopped working for MuchMusic and had plans to move to Los Angeles, California. In 2009 and 2010 she hosted WCG Ultimate gamer. Since 2011 Hannah has played the role of Cecilia "Cece" Parekh on New Girl. The role won her the Teen Choice Award for Choice TV Breakout Performance – Female in 2012. She has appeared in episodes of Kojak, The Carrie Diaries, 1600 Penn, So You Think You Can Dance, and Hot Package. Simone was featured Gillette's "What Women Want" campaign. She starred in the music video "Angel in Blue Jeans" for the band Train. 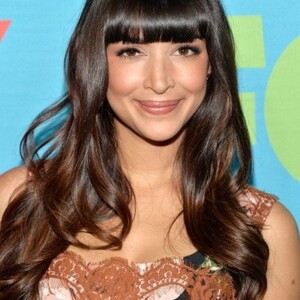