Halston Sage Net Worth: Halston Sage is an American actress who has a net worth of $3 million. Halston Sage (aka Halston Jean Schrage) was born May 10, 1993 in Los Angeles, California. She is best known for her roles as Grace on the Nickelodeon TV series How to Rock and Amber on the NBC primetime series Crisis.

Born and raised in Los Angeles, Sage broke into modeling at the age of 14 and quickly realized she had a passion for acting. In addition to her acting credits, Sage is an award-winning equestrian and has a great love for writing. During her career, Sage has worked alongside Emma Watson in Oscar-winner Sofia Coppola's movie The Bling Ring (2013), appeared as a guest star in two Nickelodeon hit series, Victorious (2010) and Bucket and Skinner's Epic Adventures. Halston Sage can also be seen in the Jon Kasdan-directed indie film The First Time, opposite Britt Robertson, which premiered at the Sundance Film Festival. She subsequently landed the lead in Greg Francis's indie film Poker Night alongside Ron Perlman and Titus Welliver. Sage was also cast in the summer film Sony's Grown Ups 2 (2013), alongside Adam Sandler and all-star ensemble. Her most recent role is as Amber in Rand Ravich's new series for NBC, Crisis (2014), opposite Gillian Anderson and Dermot Mulroney. 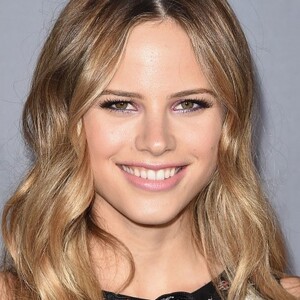