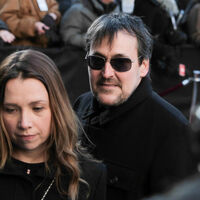 Guy A. Lepage Net Worth

Guy A. Lepage net worth: Guy A. Lepage is a Canadian comedian, actor, and producer who has a net worth of $10 million. Guy A. Lepage was born in Montreal, Quebec, Canada in August 1960. He was a founding member of the Quebec comedy group Rock et Belles Oreilles and was with the group from 1981 to 1995. Lepage created, starred in, produced, directed, and wrote for the television series Un gars, une fille. He then worked on the talk show Tout le monde en parle. Lepage was ranked #6 in Maclean's magazine's 50 most important people in Canada in 2014. In 1998 he won Gemeaux Awards for Best Acting, Best Writing, and Best Direction for Un gars, une fille. As an actor Lepage has also appeared in other films and TV series including Les pecheurs, L'Empire Bo$$e, L'appat, Tout sur moi, Bye-Bye, Idole instantanee, Les aimants, Camping sauvage, and more.