Griffin Gluck net worth: Griffin Gluck is an American actor who has a net worth of $1 million. He is known for starring in several movies and TV series.

Griffin Gluck was born in Los Angeles, California in August 2000. He first appeared in the 2003 short Time Out. Gluck had a recurring role on the television series United States of Tara as Monty in 2011. From 2011 to 2013 he starred as Mason Warner on the TV series Private Practice. Griffin Gluck starred as Danny Gannon on the series Back in the Game from 2013 to 2014. From 2014 to 2015 he starred as Charlie on the television series Red Bank Society. Gluck had a recurring role as Clay on the TV series About a Boy in 2015. From 2017 to 2018 he starred as Sam Ecklund on the series American Vandal. Gluck starred as Gabe on the TV series Locke & Key starting in 2020. He has appeared in films including Just Go with It, Trust Me, Just Before I Go, Larry Gaye; Renegade Male Flight Attendant, Middle School: The Worst Years of My Life, Why Him?, Big Time Adolescence, Tall Girl, and Dinner in America. He was nominated for a Young Artist Award in 2012 and a Young Entertainer Award in 2017. 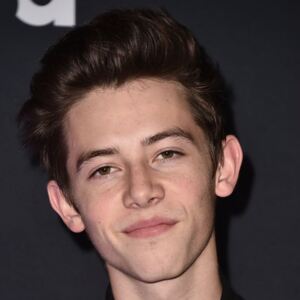