How much is Gregory Harrison Worth?

Gregory Harrison Net Worth: Gregory Harrison is an American actor who has a net worth of $3 million. Born Gregory Neale Harrison on May 31, 1950, in Avalon, Santa Catalina Island, California, he made a name for himself primarily on the small screen in the 1980s. Early in his career, he made his breakthrough as the title character on the popular science fiction series Logan's Run (1977-1978). Next, he landed roles in the NBC miniseries Centennial and CBS sitcom Family Man. But it wasn't until he got the role of playful Dr. G. Alonzo 'Gonzo' Gates on the long-running dramatic series, "Trapper John, M.D." (CBS, 1979–1986) that he reached global stardom. Already firmly established as a handsome and likable leading man, Harrison tried his hand at several other TV projects like "Battles of the Network Stars", "For Ladies Only" (1981, as a male stripper), "Picnic" (1986) and "Breaking the Silence" (1992). When it comes to big screen engagements, he could be seen in such feature films as "Razorback" (1984), "Dangerous Pursuit" (1990) and "It's My Party" (1996). It was in 1997 that he made his Broadway musical debut portraying a disreputable emcee of a marathon dance in the Kander and Ebb musical "Steel Pier". Curly-haired Harrison left a deep imprint in the showbiz with his incredible appearances in TV movies, film, and stage. When it comes to his private life, Gregory Harrison has been married to actress, Randi Oakes since 1980. The couple has four children. 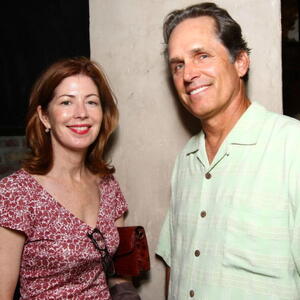