Graham Phillips Net Worth: Graham Phillips is an American actor and singer who has a net worth of $2 million. Graham Phillips was born in Laguna Beach, California in April 1993. He started attending Princeton University in 2012. In 2008 he starred on Broadway in the musical comedy 13. His first television appearance came in the series The King of Queens in 2002.

In 2004 he appeared in an episode of the TV series Judging Amy and in 2005 starred in the TV movie Love's Long Journey. IN 2006 Phillips appeared in the series Crossing Jordan and played Moses's Son in The Ten Commandments: The Musical. He starred as Jordan Baxter in the 2007 movie Evan Almighty. Graham starred in the 2007 TV movie Ben 10: Race Against Time and as Mark Wakefield in the 2009 movie Stolen Lives. Since 2009 he has starred as Zach Florrick in the CBS series The Good Wife. He appeared on the series White Collar in 2012 and starred in as Ellis Whitman in the film Goats. Phillips starred in the movies Innocence in 2013 and Staten Island Sumer in 2014. He has been nominated for three Screen Actors Guild Awards and two Young Artist Awards. As a singer he has appeared on The Today Show and was featured on Meat Loaf's 2006 album Bat Out of Hell III: The Monster is Loose. 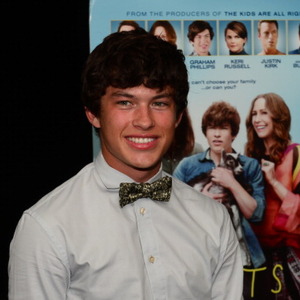