As a singer she opened for Billie Holiday and Buddy Rich in Chicago nightclubs. As an actress Whitney first starred in the movie Mystery Range in 1947. In 1966 she starred as Yeoman Janice Rand in the TV series Star Trek. Whitney also starred as Janice Rand in the movie Star Trek: The Motion Picture. She played other roles in the movies Star Trek III: The Search for Spock, Star Trek IV: The Voyage Home, and Star Trek VI: The Undiscovered Country. She also starred in the films The Texan Meets Calamity Jane, House of Wax, Top Banana, The Naked and the Dead, Some Like It Hot, Pocketful of Miracles, and The Man from Galveston. Whitney was the first Chicken of the Sea mermaid and authored her autobiography The Longest Trek: My Tour of the Galaxy in 1998. Grace Lee Whitney passed away on May 1, 2015 at 85 years old. 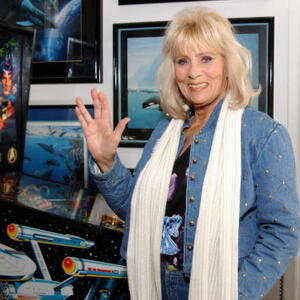