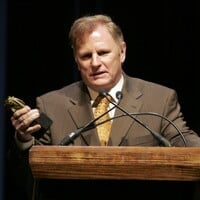 Gordon Clapp net worth: Gordon Clapp is an American actor who has a net worth of $5 million. Gordon Clapp was born in North Conway, New Hampshire in September 1948. He is best known for starring as Det. Greg Medavoy in the television series NYPD Blue. Clapp has nearly 100 acting credits to his name starting in 1979 with the movies Return of the Secaucus Seven and Running. From 1985 to 1988 he starred as Viker in the TV series Check It Out. His best known role came starring as Det. Greg Medavoy in the series NYPD Blue from 1993 to 2005. Since 2014 Clapp has had a recurring role as Chaplain Orlovsky in the television series Chicago Fire. He has also starred in the movies Eight Men Out, Stand Off, The Rage: Carrie 2, Flags of Our Fathers, The Game Plan, Peter and John, and The Perfect Guy. Clapp won a Primetime Emmy Award in 1998 and a Screen Actors Guild in 1995 for NYPD Blue.