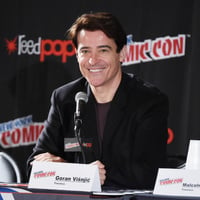 Goran Visnjic Net Worth: Goran Visnjic is a Croatian actor and producer who has a net worth of $2 Million. Born in Sibenik, Croatia, Yugoslavia on September 9, 1972, Visnjic is best known for his involvement with ER in 1994, Ice Age in 2002, and The Girl With the Dragon Tattoo in 2011. Visnjic has appeared primarily in American and British productions and has appeared in music videos such as Madonna's "The Power of Goodbye." He attended the Academy of Dramatic Arts at the University of Zagreb and was the youngest actor selected to play Hamlet in the history of the Dubrovnik Summer Theatre Festival in Croatia. He had a seven year run as Hamlet after initially chosen to play Laertes and received a number of Orlando Awards for his winning performance. Visnjic spent a total of nine years on ER before leaving the show during season 15. He is currently married to fellow Croatian actress, Ivan Vrdoljak and lives in Los Angeles, California. They have also been known to own a boat and house on the Croatian island of Hvar with their two children, Tin and Vigo. Visnjic also has a daughter by the name of Lana. Visnjic is also involved in the Eastern European branch of PETA and supports animal rights organizations in both Europe and California. He was recognized as People's Sexiest Import in 1999 and Best Croatian Actor in 2004 according to Internet sources.