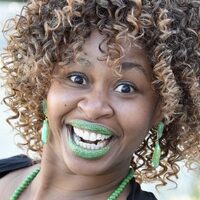 GloZell Green net worth: GloZell Green is an American comedian and YouTube personality who has a net worth of $2 million. GloZell Green was born in July 1972 and lives in Hollywood, California. She graduated with a degree in musical theater from the University of Florida. After moving to Hollywood Green joined The Groundlings. She attended 600 consecutive tapings of The Tonight Show with Jay Leno and started a blog where she interviewed other audience members. Her first YouTube Video was titled "My Push up Bra will help me get my man" and had more than 20 million views by 2013. Her YouTube channel features interviews, song parodies, and comedy about her own life. As of August 2014 her YouTube channel had over 500 million total views and three million subscribers. She has had six different videos get more than 10 million views. Actor Elijah Wood mentioned GloZell in a 2011 interview on Jimmy Kimmel Live! which led her to gain notoriety. Green appeared in the web series Dr. Fubalous in 2012. She has released four albums available for digital download and was nominated for a Screenchart! Channel Award for Best Female Personality in 2014. As of December 2018 she has just under 5 million subscribers on YouTube and has generated just under 1 billion video views across various platforms.