Ginger Rogers net worth: Ginger Rogers was an American actress, dancer, and singer who had a net worth of $20 million. Ginger Rogers was born in Independence, Missouri in July 1911 and passed away in April 1995. She was known for her collaborations with Fred Astaire in ten Hollywood musical films.

Rogers was ranked #14 on AFI's 100 Years…100 Stars list. She starred in the movies Young Man of Manhattan, Queen High, The Sap from Syracuse, Follow the Leader, Honor Among Lovers, The Tip-Off, Suicide Fleet, Carnival Boat, The Thirteenth Guest, 42nd Street, Gold Diggers of 1933, Professional Sweetheart, A Shriek in the Night, Sitting Pretty, Flying Down to Rio, Chance at Heaven, Rafter Romance, Finishing School, Twenty Million Sweethearts, Change of Heart, Upperworld, The Gay Divorcee, Romance in Manhattan, Roberta, Star of Midnight, Top Hat, In Person, Follow the Fleet, Swing Time, Shall We Dance, Stage Door, Having Wonderful Time, Vivacious Lady, Carefree, The Story of Vernon and Irene Castle, Bachelor Mother, Fifth Avenue Girl, Primrose Path, Lucky Partners, Kitty Foyle, Tom, Dick and Harry, Roxie Hart, Tales of Manhattan, The Major and the Minor, Once Upon a Honeymoon, Tender Comrade, Lady in the Dark, I'll Be Seeing You, Week-End at the Waldorf, Heartbeat, It Had to Be You, The Barkleys of Broadway, Perfect Stranger, Storm Warning, The Groom Wore Spurs, We're Not Married!, Monkey Business, Dreamboat, Forever Female, Black Widow, Twist of Fate, Tight Spot, The First Traveling Saleslady, Teenage Rebel, Oh, Men! Oh, Women!, and Harlow. Rogers won an Academy Award in 1941 for Best Actress in a Leading Role for Kitty Foyle. In 1960 she received a star on the Hollywood Walk of Fame at 6772 Hollywood Blvd. Ginger Rogers passed away on April 25, 1995 at 83 years old. 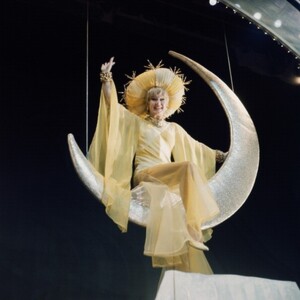