Gina Torres net worth: Gina Torres is an American actress who has a net worth of $15 million. Gina is probably best-known for her role on the series "Suits" and for being married to Laurence Fishburne from 2002 to 2018.

Born in Manhattan, New York, Gina Torres was originally focused on a career in music, and attended the Fiorello H. LaGuardia High School of Music & Art and Performing Arts, where she studied opera and jazz. After graduating, she was accepted to multiple colleges, but began her professional career instead. She appeared in guest starring and recurring roles on multiple television series throughout the 90s, including, "Law & Order", "NYPD Blue", "One Life to Live", "Profiler", and "Xena: Warrior Princess". She also appeared in such films as "Bed of Roses" and "Substance of Fire". She gained a widespread cult following for her work in the television series, "Cleopatra 2525", and "Firefly". Since then, she has appeared in such projects as, "Alias", "Angel", "The Shield", "Eli Stone", "The Unit", and "Castle". She also appeared in "The Matrix" franchise.

Gina Torres was married to actor Laurence Fishburne from 2002 to 2018. They have one daughter together, who was born in 2007. 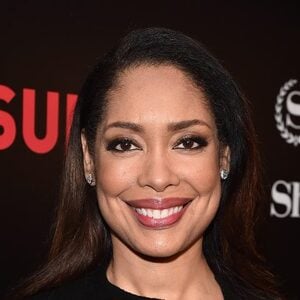