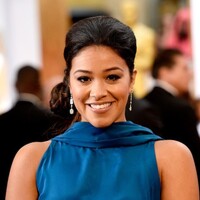 Gina Rodriguez Net Worth: Gina Rodriguez is an American actress who has a net worth of $5 million. Gina Rodriguez was born in Chicago, Illinois in July 1984. She started performing as a salsa dancer at seven years old. When she was 16 she became one of 13 teenagers to be accepted into Columbia University. Gina studied at NYU's Tisch School of the Arts and trained at the Atlantic Theatre Company and Experimental Theatre Wing. She worked on stage portraying Frida Kahlo. Her first television role came in the series Jonny Zero in 2005. Her film debut came in the 2008 movie Calling It Quits. In 2010 she had a recurring role as Marisol Evans in the TV series Army Wives. From 2011 to 2012 Rodriguez starred as Beverly on the soap opera The Bold and the Beautiful. She has starred in the films Out Family Wedding, My Super Psycho Sweet 16: Part 2, Go for It!, Filly Brown, California Winter, Enter the Dangerous Mind, and Sleeping with the Fishes. She is scheduled to star in the upcoming TV series Jane the Virgin. Rodriguez won an ALMA Award in 2013 and an Imagen Award in 2012.