What is Gillian Anderson's net worth and salary?

Gillian Anderson was born in Chicago, Illinois on August 9, 1968. Her father Edward Anderson owned a film post-production company. Her parents moved to Puerto Rico for 15 months and then to London so that her father could attend the London Film School. She grew up in north London's Crouch End neighborhood and attended Coleridge Primary School. She was 11 when the family returned to the United States and they settled in Grand Rapids, Michigan. They continued to keep a flat in London and spent their summers there.

Following their move back to the States, Anderson went through a rebellious stage as a teen (petty theft, dating a much older boyfriend, and more) and was put in therapy at the age of 14. After graduating high school, Anderson attended The Theatre School at DePaul University in Chicago and earned a Bachelor of Fine Arts in 1990. She participated in the National Theatre of Great Britain's summer program at Cornell University. To support herself through school, she worked at the Goose Island Brewpub in Chicago. She is bidialectal–with her English accent and background she had trouble fitting in in the Midwest as a teenager and adopted a Midwestern accent in order to blend in. To this day, she can still shift effortlessly between her American and English accents.

Anderson moved to New York when she was 22 and began her career in the play "Absent Friends." For her role, she won the Theatre World Award for Best Newcomer. In 1992, she moved to Los Angeles and auditioned for a year before landing her first role in the film "The Turning." She vowed never to do television work, but being out of work for a year changed her mind. She broke into mainstream TV in 1993 with a guest appearance on "Class of '96." As a result, she was sent the script for "The X-Files."

Anderson was cast as FBI Special Agent Dana Scully. When the series began filming, Anderson assumed it would only run for 13 episodes. The X-Files debuted on September 10, 1993 and ran until May 19, 2002, clocking in at nine seasons. During that time The X Files aired 202 episodes over nine seasons on the Fox network. "The X-Files" would eventually go on to become one of the highest-rated and most profitable shows for Fox and launched both David Duchovny and Gillian Anderson's careers into A-List status. The show also spawned two feature films that performed modestly at the box office. Anderson won numerous awards for her portrayal of Scully, including an Emmy, a Golden Globe, and a SAG award all in the same year, the first actress to do so. She was also the first woman to write and direct an episode of the "X-Files." Gillian also appeared in the reboot of the "X-Files" in 2016.

Gillian famously earned much less than her X-Files co-star David Duchovny for the show's first three seasons. Gillian later claimed that her original contract actually required that she stand a few feet behind David in all scenes. After the show become an enormous hit, thanks in no small part to Dana Scully, Gillian was able to negotiate a deal where she would be paid equally to David in all future seasons and iterations of The X-Files. Her salary before this deal is not known but David earned $150,000 per episode over the first three seasons. Their equal salary from the fourth season on was $240,000 per episode. That would equate to $5.76 million per 24-episode season. That's the same as $10 million in today's dollars after adjusting for inflation.

David and Gillian each earned $4 million to star in the first X-Files film. They each earned an estimated $6 million for the second film. 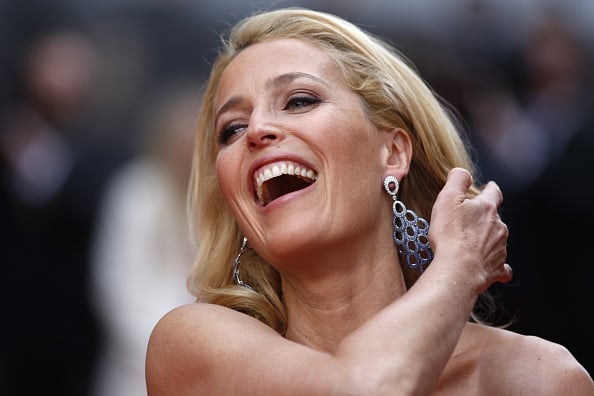 After "The X-Files" ended in 2002, Anderson moved back to London for a change of pace and to return to the stage. She made her West End debut that year in "What The Night Is For" at the Comedy Theatre. In 2004, she starred in the Royal Court Theatre's production of "The Sweetest Swing in Baseball." In 2006, she appeared in the BBC miniseries "Bleak House," for which she was nominated for a BAFTA and an Emmy, as well as a Golden Globe. In 2009, she appeared again on a West End stage in "A Doll's House."

In 2013, Anderson began starring as Detective Superintendent Stella Gibson in the Irish-British crime drama "The Fall" opposite Jamie Dornan. The series was critically acclaimed and Anderson was nominated for multiple awards. She served as executive producer for the second season of the show.

Between 2013 and 2015, Anderson starred in the NBC series "Hannibal." In 2014, she gained wide acclaim for her stage performance as Blanche in "A Streetcar Named Desire" at the Young Vic Theatre in London. The production became the fastest selling show in the theatre's history and the run was extended by two weeks due to demand for tickets.

Anderson then went on to appear in several more stage productions and TV series including "American Gods," "Crooked House," and "All About Eve." In January 2019, Anderson began playing the role of Jean Milburn in the Netflix series "Sex Education." It was announced on September 7, 2019 that Anderson would portray former British Prime Minister Margaret Thatcher in the fourth season of Netflix's "The Crown."

Gillian Anderson has been married twice. Once to Clyde Klotz from 1994-1997 and a second time to Julian Ozanne from 2004-2007. She has three children, two of which come from a relationship with former boyfriend Mark Griffiths–their relationship ended in 2012. Her first husband Clyde Klotz was an assistant art director on The X-Files. Since 2016, she has been in a relationship with screenwriter Peter Morgan. Anderson lives in London with her three children, where she has lived since 2002.

Anderson is heavily involved in many charitable organizations and activist causes. She also runs her own humanitarian ventures. She supports the Trevor Project as well as the Feminist Majority Foundation. She is also an involved spokesperson for the Neurofibromatosis Network and holds auctions and benefits for the network. Her brother Aaron died from the disease in 2011. She also supports the Children with Tumours organization and the Global Genes movement. In 2008, Anderson co-founded South African Youth Education for Sustainability, which aims to empower marginalized youth in South Africa through youth mentoring. Anderson is very active in organizations that support women's rights. 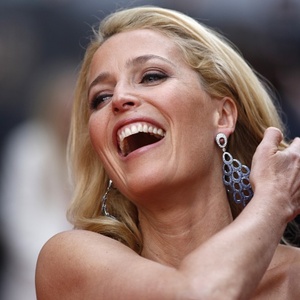