How much is Georgia King Worth?

Georgia King Net Worth: Georgia King is a Scottish actress who has a net worth of $2 million dollars. Georgia King was born in Edinburgh, Scotland, in 1986 to an actor father and opera singer mother. She got a job at a cheese shop as a teenager and broke into acting when she was 18 years old despite plans to become a director. King made her debut in a production of "Jane Eyre" despite coming down with appendicitis a week prior to filming. She scored a variety of roles in the late 2000s with appearances in "The History of Mr. Polly", "Little Dorrit", "The Shadow in the North", "Free Agents", "Off the Hook", "Merlin", and "Sugartown" before landing the part of Goldie Clemmons on the hit series "The New Normal". King's movie appearances include "Wild Child", "Tormented", "St. Trininan's 2: The Legend of Fritton's Gold", "Burke and Hare", "Chalet Girl", "One Day", "Cockneys vs Zombies", and "Austenland". She is set to appear in 2015's "Kill Your Friends". The five-foot-nine actress studied at the Exeter School. In 2012, she was forced to close her Twitter account when fans of her boyfriend, Bradley James, began attacking her online. She and James began dating after meeting on the set of the BBC show "Merlin", where James plays King Arthur. 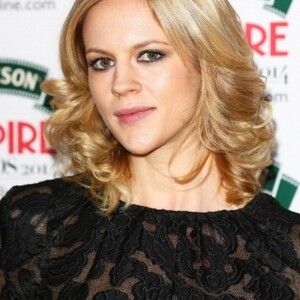