George Takei Net Worth: George Takei is an American actor and author who has a net worth of $14 million. Takei started his career in Hollywood at a time when Asians were not often cast in American productions. He started doing voiceover work for Japanese monster films, and before getting his big break, George guest-starred on the TV shows "Perry Mason" (1959), "The Twilight Zone" (1964), and "My Three Sons" (1965). In 1965, Takei was cast as Hikaru Sulu on "Star Trek," which ran from 1966 to 1969. Aside from the TV series, Takei appeared in six "Star Trek" movies. George has more than 200 acting credits to his name, and he has lent his voice to several animated projects, including "Mulan" (1998), "Free Birds" (2013), and "The Simpsons" (1991–2013). Takei has also appeared on the reality TV shows "I'm a Celebrity…Get Me Out of Here!" (2008) and "The Celebrity Apprentice" (2012). In 2004, George was awarded the Order of the Rising Sun, Gold Rays with Rosette by the Japanese government. He published his autobiography, "To the Stars," in 1994.

Early Life: George Takei was born Hosato Takei on April 20, 1937, in Los Angeles, California. His parents, Fumiko and Takekuma, were Japanese-American, and his father owned a dry-cleaning business, then a grocery store, before going into real estate. After the bombing of Pearl Harbor, armed soldiers forced the family to leave their home, and they were sent to an internment camp in Arkansas, the Rohwer War Relocation Center. The Takeis were later sent to California's Tule Lake War Relocation Center. Many of George's relatives lived in Japan during World War II, and an aunt and infant cousin were killed during the bombing of Hiroshima.

When the war ended in 1945, the Takei family was released from the internment camp, but they no longer had a home, business, or bank accounts, leading them to live on Skid Row until 1950. George studied at Mount Vernon Junior High School and graduated from Los Angeles High School, where he was Boys Division President. He studied architecture at the University of California, Berkeley, then transferred to the University of California, Los Angeles, graduating with a Bachelor of Arts in theater in 1960, followed by a Master of Arts in theater four years later. Takei also took classes at England's Shakespeare Institute at Stratford-upon-Avon, Toyko's Sophia University, and Hollywood's Desilu Workshop.

Takei has appeared in several stage productions, such as "Fly Blackbird!" (1961), "Aladdin" (1987), and "Equus" (2005). In 2012, he performed in Dustin Lance Black's "8" at L.A.'s Wilshire Ebell Theatre. The play was a staged reenactment of the Perry v. Brown federal trial that overturned California's ban on gay marriage (Prop 8), and the all-star cast also included Brad Pitt, Martin Sheen, Jamie Lee Curtis, and George Clooney. From 2012 to 2016, George starred in "Allegiance" at San Diego's Old Globe Theatre and the Longacre Theatre on Broadway. The musical is based on Takei's experiences in internment camps during World War II, and he played the roles of Sam Kimura and Ojii-San. In 2019, George published a graphic novel, "They Called Us Enemy," and it won an American Book Award.

Personal Life: George revealed that he was gay in 2005, and he married Brad Altman in a Buddhist ceremony at L.A.'s Democracy Forum of the Japanese American National Museum on September 14, 2008. Takei is a co-founder of the museum as well as a member of the board of trustees, and he and Brad won $10,000 for the museum on a 2009 episode of "The Newlywed Game." In 2013, George became a spokesperson for the Human Rights Campaign, serving as the face of their "Coming Out Project" and embarking on a nationwide speaking tour called "Equality Trek." In 1973, Takei ran for Los Angeles City Council, coming in second to David Cunningham Jr., and was later appointed to the Southern California Rapid Transit District board of directors by Los Angeles Mayor Tom Bradley.

In a 2017 interview with "The Hollywood Reporter," Scott R. Brunton, a former model and actor, accused George of drugging and groping him in 1981. Takei denied Brunton's allegation, stating, "Non-consensual acts are so antithetical to my values and my practices, the very idea that someone would accuse me of this is quite personally painful." Brunton later changed his story and said he didn't actually remember George touching his genitals, and toxicologists explained that based on Bruton's version of events, he most likely suffered from postural hypotension, not a drugged drink. Takei publicly forgave Brunton in May 2018.

Awards and Honors: In 2014, the GLAAD Media Awards honored George with the Vito Russo Award, and he received the Timeless Award from the GALECA: The Society of LGBTQ Entertainment Critics the following year. He received a Lifetime Achievement Award at the 2007 San Diego Asian Film Festival and a Frameline Award at the 2014 San Francisco International Lesbian & Gay Film Festival. Takei earned a Best Supporting Actor award for "Hopeful Romantic" at the 2015 Chelsea Film Festival and a 2014 Webby Award for Online Film & Video: Documentary, Individual Episode for "Takei's Take." He was inducted into the Online Film & Television Association TV Hall of Fame in 2015, and he received a star on the Hollywood Walk of Fame in 1986.

In 2012, George was awarded the LGBT Humanist Award by the American Humanist Association, and he received the Distinguished Medal of Honor for Lifetime Achievement and Public Service from the Japanese American National Museum in 2015. In 2007, the International Astronomical Union renamed Asteroid 1994 GT9 "Asteroid 7307 Takei" in George's honor, and he received an honorary Doctorate of Humane Letters from California State University, Los Angeles in 2016. He also earned an Inkpot Award from Comic-Con International in 2019.

Real Estate: In 2001, George and Brad paid $475,000 for an 808 square foot apartment in New York City's Metropolitan Tower, and they put the 1-bedroom home on the market for $1.35 million in 2019. The renovated apartment includes floor-to-ceiling windows, a marble half-bath, a home office, and custom closets. 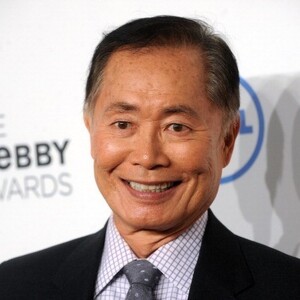