He studied acting at the Pasadena Playhouse where he met his future wife Ellanora Needles. Reeves had over 80 acting credits to his name. He first appeared in 1939 when he starred in the films Four Wives, Gone with the Wind, On Dress Parade, Smashing the Money Ring, and Espionage Agent. His best known role came starring as Superman/Clark Kent on the TV series Adventures of Superman from 1952 to 1958. Reeves also starred as Superman/Clark Kent in the 1951 movie Superman and the Mole Men. He appeared in epidotes of the TV series Suspense from 1949 to 1950 and Kraft Theatre from 1949 to 1952. In 1960 he was awarded a star on the Hollywood Walk of Fame at 6709 Hollywood Blvd. George Reeves passed away on June 16, 1959 at the age of 45 from a gunshot wound. The official finding was that his death was a suicide although some people believed that he was murdered or a victim of an accidental shooting. 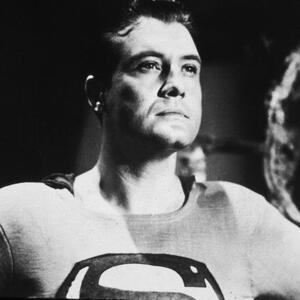