George Peppard net worth: George Peppard was an American actor and producer who had a net worth of $5 million. George Peppard was born in Detroit, Michigan in October 1928 and passed away in May 1994. Peppard became a Corporal in the United States Marine Corps and graduated from the Carnegie Institute of Technology.

He started acting on stage at the Pittsburgh Playhouse and moved to New York City, New York to study at The Actors Studio. From 1972 to 1974 Peppard starred as Thomas Banacek in the television series Banacek. From 1975 to 1976 he starred in the TV series Doctors' Hospital as Dr. Jake Goodwin. One of his best known roles came starring as John "Hannibal" Smith in the TV series The A-Team from 1983 to 1987. Peppard also starred in the movies The Strange One, Pork Chop Hill, Home from the Hill, Breakfast at Tiffany's, How the West Was Won, The Carpetbaggers, Rough Night in Jericho, House of Cards, The Executioner, and Newman's Law. He won a National Board of Review Award and was nominated for a BAFTA Award for Home from the Hill. In 1985 Peppard was awarded a star on the Hollywood Walk of Fame at 6675 Hollywood Blvd. George Peppard passed away on May 8, 1994 at the age of 65 from pneumonia. 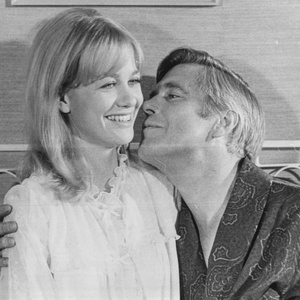