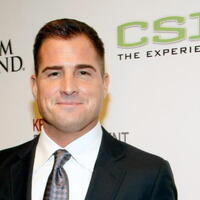 George Eads net worth: George Eads is an American actor who has a net worth of $13 million dollars. George Eads was born in Fort Worth, Texas, and graduated from Texas Tech University with a degree in Marketing in the late 80s. He worked as a salesman post-college, and then decided to pursue a career in acting. He relocated to Los Angeles, where he booked his first major role in the pilot of "Savannah", in 1996. His character was killed off in the first episode, but proved to be so popular that they brought him back through a series of flashbacks, and then created a twin brother for him. From there, he went on to roles in television movies and TV shows, including "Crowned and Dangerous", "Grapevine", "Second String", "Monte Walsh", and "Evil Knievel". He also guest-starred on the sitcom, "Two and a Half Men", and has provided voiceovers for the cartoon "Young Justice". He is most widely recognized for his work as Nick Stokes on "CSI: Crime Scene Investigation".