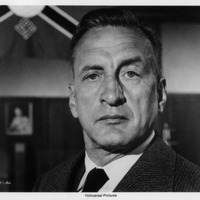 George Campbell Scott was born in Wise, Virginia in October 1927 and passed away in September 1999. He became the first actor to refuse the Academy Award for Best Actor for Patton in 1970. Scott starred as Neil Brock on the television series East Side/West Side from 1963 to 1964. From 1987 to 1988 he starred as President Samuel Arthur Tresch on the TV series Mr. President. George C. Scott starred in several films and episodes of TV series including Anatomy of a Murder, The Hustler, Ben Casey, The Crucible, Petulia, Patton, Jane Eyre, The Price, They Might Be Giants, The Hospital, Beauty and the Beast, Movie Movie, The Changeling, A Christmas Carol, 12 Angry Men, Inherit the Wind, and more. After refusing the Oscar for Patton he was once again nominated for an Academy Award for Best Actor in a Leading Role in 1972 for The Hospital.

George C. Scott was married five times including to Colleen Dewhurst twice and Trish Van Devere. He had seven children including actors Devon and Campbell Scott. George C. Scott passed away on September 22, 1999 at 71 years old.

In 2001, George's widow Trish put their 14.5-acre Greenwich, Connecticut estate on the market for $11.5 million. They bought the property in the 1970s for a little under $500,000. She ultimately reduced the asking price to around $9 million. She finally sold the property in 2005 for $8.725 million to a real estate developer. The new owner razed the previous home and built a 14,000 square-foot manner. In 2011 the developer flipped the property for an impressive $32.5 million.

The Scott's also had a home in the Los Angeles suburb of Westlake Village within a gated community.

In 1970 he was paid a base salary of $600,000 to appear in "Patton". He was also given 5% of the gross earnings. When the movie went on to make $45 million at the box office, George earned an additional $2.25 million. That's the same as $15 million today which proved to be by far George's biggest single career payday.

George earned $1 million for 1975's "The Hindenburg" plus a percent of profits. It's unclear how profitable the movie was after Hollywood accounting.