Gene Kelly Net Worth: Gene Kelly was an American dancer, actor, singer, film director and producer as well as choreographer who had a net worth of $10 million dollars. Eugene Curran "Gene" Kelly was born August 23, 1912 in Highland Park, Pittsburgh, Pennsylvania. At the age of 8, Kelly was enrolled in his mother's dance classes, but Kelly preferred sports and wanted to play football.

His mother, however, organized Kelly and his siblings into a dance troupe called The Five Kellys and showcased them at numerous amateur nights. Eventually, he moved to New York City and found his way into the chorus line of Broadway musicals. His big break was in the title role of the Broadway musical Pal Joey in 1940. Two years later, he made his film debut in For Me and My Gal alongside Judy Garland. Kelly went on to became one of the top stars of the '40s and '50s and had a major impact on dancing in the movies. He also directed films, including Gigot and Hello, Dolly!. His most memorable films, most of which he choreographed, include An American in Paris and Singin' in the Rain, touted as one of the greatest musicals ever made, in which Kelly starred in the famous dance sequence of the title song, as well as Anchors Aweigh, The Pirate, The Three Musketeers, On the Town, Take Me Out to the Ball Game, Brigadoon and Invitation to the Dance. Kelly actually filmed the iconic sequence from Singin' in the Rain while sick with a 103-degree fever. He continued working sporadically in films throughout the '60s, appearing in Inherit the Wind, What a Way to Go! and 40 Carats, among others. Kelly was the recipient of an Academy Honorary Award in 1952 for his career achievements. He later received lifetime achievement awards from the Kennedy Center Honors (1982) and from the Screen Actors Guild and American Film Institute.

In 1999, the American Film Institute numbered him 15th on their Greatest Male Stars of All Time list. Gene Kelly was married to Betsy Blair for 16 years (1941-57) and they had one child, Kerry. He was then married to Jeanne Coyne from 1960 until her death in 1973. They had two children, Bridget and Tim. Kelly was married to Patricia Ward from 1990 until his death in 1996. Eugene Curran Kelly died in his sleep on February 2, 1996. 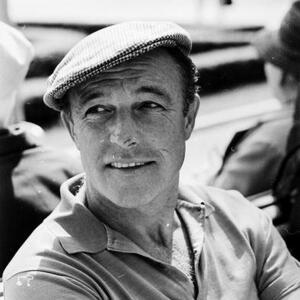