How much is Geena Davis Worth?

Geena Davis Net Worth: Geena Davis is an American actress, writer, producer and model who has a net worth of $30 million dollars. She is one of the film world's biggest leading ladies of the 1990s and 2000s. She is probably best known for roles in films like "Thelma & Louise", "A League of Their Own" and "The Long Kiss Goodnight".

Early Life: She was born Virginia Elizabeth Davis in Wareham, Massachusetts, on January 21, 1956. Her mother Lucille was a teacher's assistant and her father William was a civil engineer. She became interested in music at an early age, playing piano and flute and organ as a teenager and serving as an organist at her Congregationalist church. She went to Wareham High School and was an exchange student in Sweden where she became fluent in the language. Geena Davis earned her drama degree from Boston University and worked as a window mannequin for Ann Taylor until she landed her modeling deal with Zoli modeling agency.

Career: During her modeling career, Davis scored a role in the 1982 film "Tootsie" and went on to act in several other productions, including "Buffalo Bill", "Knight Rider", "Riptide", and "Family Ties." "Tootsie" was the second most profitable screen production of 1982 and received ten Oscar nods. The film is now considered a cult classic. In 1984, Geena landed her own series, "Sara," but it was short-lived, lasting only 13 episodes. She read for the role of Sarah Connor in 1984's "Terminator" but the role ultimately went to Linda Hamilton. Davis appeared with Chevy Chase in 1985's "Fletch" as the colleague of a Los Angeles Times undercover reporter trying to expose drug trafficking on the beaches of Los Angeles. In 1985, Davis starred in the horror comey "Transylvania 6-5000" alongside Jeff Goldblum. The two, who were married in real life at this point, reunited professionally in the sci-fi thriller "The Fly" in 1986, which was a commercial success and helped further establish Davis in the Hollywood acting scene. She worked with Goldblum yet again in 1987's "Earth Girls Are Easy."

Breakthrough and Success: Tim Burton cast Davis in his film "Beetlejuice" in 1988 as one half of a recently deceased young couple who become ghosts haunting their former house. The film was extremely successful and made $73.7 million from a budget of $15 million. Davis earned her first Best Supporting Actress Oscar for the 1988 film "The Accidental Tourist." Her next big role was opposite Susan Sarandon in "Thelma & Louise" in 1991, for which she was nominated for another Oscar. In 1992, Davis starred alongside Tom Hanks and Madonna in "A League of Their Own" about an all-female baseball team. The film reached No. 1 at the box office and became the tenth highest-grossing film in North America. For her role, she earned a Golden Globe nomination for Best Actress. Her next film, the comedy "Hero" in 1992, was a box office flop, although her performance was praised by Roger Ebert and other critics.

Davis starred in 1994's "Angie", playing an office worker in Brooklyn who dreams of a better life. It was a commercial failure and received mixed reviews from critics. In her other 1994 release, "Speechless," she starred with Michael Keaton as an insomniac writer. The film opened to negative reviews and modest box office returns, but she was nominated for a Golden Globe for Best Actress in a Comedy for her work. Up next, she teamed up with her then-husband director Renny Harlin for the films "Cutthroat Island" and "The Long Kiss Goodnight."  She appeared as Eleanor Little in the popular family comedy film "Stuart Little" in 1999 and she reprised her role in "Stuart Little 2" and again in "Stuart Little 3: Call of the Wild." Davis starred on the sitcom "The Geena Davis Show" for one season on ABC during the 2000-2001 season. Davis then went on to star in the ABC tv series "Commander in Chief" where she portrayed the first female president of the United States. She earned a Golden Globe for Best Actress in a Drama Series in 2006, but the series was canceled after just one season. She was also nominated for an Emmy and a SAG award for her work. In 2009, she portrayed a foul-mouthed strict mother in the Australian film "Accidents Happen." She was the only American actor to be cast.

Davis later ventured into TV roles, including appearing as the grown-up Regan MacNeil in the 2016 series "The Exorcist" based on the 1973 film of the same name. She also had a long stint on "Grey's Anatomy" in the recurring role of Dr. Nicole Herman, appearing in 13 episodes over the span of 2014-2018. She executive produced the documentary "This Changes Everything" in 2018. In 2019, Davis joined the cast of Netflix's "Glow" as Sandy Devereaux St. Clair.

Davis married director Renny Harlin in 1993 after five months of dating. Gina filed for divorce in August 1997 from Harlin one day after her personal assistant gave birth to a child fathered by Harlin. Their divorce became final in June 1998. Davis then began dating neurosurgeon Reza Jarrahy and allegedly married him in September 2001. They have three children together. In May 2018, Jarrahy filed for divorce from Davis and listed their separation date as November 15, 2017. In a surprise twist, Davis responded by filing a petition in which she claimed she and Jarrahy were never legally married.

Davis is an active supporter of Title IX, which prevents gender discrimination in sports, and started The Geena Davis Institute on Gender in Media in order to improve the male-to-female ratio of characters in media targeting children.

Real Estate: In 2007 Geena paid $4.2 million for a home in LA's Pacific Palisades neighborhood. She listed the home for sale in August 2020 for just under $6 million. 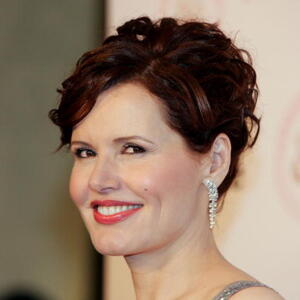