Gary Oldman Net Worth and Salary: Gary Oldman is an English actor, filmmaker, and musician who has a net worth of $40 million. Oldman is one of the most accomplished actors of the current generation, having won an Academy Award and a vast number of additional honors. As of 2020, his films have grossed over $11 billion, which makes him one of the most commercially successful actors in history.

Although Oldman began his career on the stages of England as a theatre actor, he later transitioned to film roles with considerable ease and success. Today, he is one of the most recognizable faces in Hollywood after appearing in some of the most notable films of the last few decades. Gary is known for his distinct acting style, and he often plays villains. He is also a regular fixture in various science fiction films. Outside of acting, Gary has gained writing and production credits. In addition, Oldman is an established voice actor.

Early Life: Gary Leonard Oldman was born on March 21st of 1958 in New Cross, London, England. At the age of seven, Gary's alcoholic father abandoned the family. Raised alongside an older sister who also became an actor (Laila Morse), Oldman left school at the age of 16 to work in a sports shop. He was initially inspired to pursue a career in acting by Malcolm McDowell. As a boy from south London, Oldman supported his local club, Millwall. He later learned that his father had played for Millwall as a young man.

Career: After graduating from drama school, Oldman found professional work as a stage actor, starring in plays like "Thark," "Romeo and Juliet," and "The Massacre at Paris." He then made his film debut with "Remembrance." He followed up with a number of additional appearances in various stage productions, including "The Pope's Wedding" in 1984. Due to this last performance, he was offered the role of Sid Vicious in the 1986 film "Sid and Nancy." This role drew attention from American audiences.

After appearing in "State of Grace," Oldman moved to the United States in the early 1990s. A major breakthrough came in 1992 when Gary took the role of Dracula in the film "Bram Stoker's Dracula." This led to Oldman playing villains in a number of other films, including "True Romance," "Murder in the First," "The Fifth Element," "Lost in Space," and "Leon: The Professional." He then gained critical acclaim for playing Ludwig van Beethoven in "Immortal Beloved."

After a brief career slump from 2002 to 2004, Gary Oldman returned to prominence after booking the role of Sirius Black in the Harry Potter film franchise. He then followed up by booking the role of James Gordon in "Batman Begins," a role he reprised in the film's two sequels. He also took a voice acting role in "Kung Fu Panda 2" during this period.

In 2011, he was nominated for an Academy Award after appearing in "Tinker Tailor Soldier Spy." After a string of successful roles, Gary Oldman played Winston Churchill in 2017's "Darkest Hour." He won critical acclaim for his portrayal of the British prime minister, and the performance earned him an Academy Award for Best Actor.

Acting Style: From the very beginning of his film acting career, Gary Oldman attempted to cultivate a unique performance style that would set him apart from his fellow actors. Above all else, Gary is known for his incredible versatility and range as an actor – able to play characters who are high-status, low-status, loud, quiet, villainous, friendly… the list goes on. Oldman is especially skilled when it comes to accents.

Struggle with Alcoholism: In the early 1990s, Oldman struggled with a very public battle with alcoholism. After being arrested for a DUI in 1991, he checked himself into rehab in 1994. In 2001, he described himself as a recovering alcoholic, and today he remains abstinent from alcohol.

Relationships: Gary Oldman's first wife was Lesley Manville, whom he married in 1987. Three months after having their first child, Oldman left Manville in 1989. In 1990, Gary married Uma Thurman, although their relationship lasted only two years before ending in divorce. In 1994, he became engaged to Italian actress Isabella Rossellini, but they separated in 1996 without ever marrying.

In 1997, Gary married Donya Fiorentino. They had two sons together before divorcing in 2001. In 2008, he married his fourth wife, singer and actress Alexandra Edenborough. Their divorce was finalized by 2015. In 2017, Oldman married a fifth wife, writer and art curator Gisele Shmidt.

Legal Issues: While Oldman was in the process of divorcing Fiorentino, his ex-wife accused him of domestically assaulting her in front of their children. He denied all allegations made against him and was eventually cleared of all wrongdoing. While Oldman was granted sole custody of their children, Fiorentino was granted limited, supervised contact due to her history of drug abuse and other issues. Although Fiorentino accused Oldman of child abuse in 2003, the court dismissed these claims as well. In 2018, Fiorentino accused Oldman of abuse once again by leaking a story to tabloid news outlets.

Real Estate: In 2002, it was reported that Gary Oldman had sold his home in Hollywood Hills for $2.2 million. He originally purchased the 4,000-square-foot home back in 1997. After selling the home, Oldman immediately moved into a rental property. The sale was made due to Oldman's divorce with his ex-wife, Donya Fiorentino.

In 2018, Oldman sold again – this time in the Los Feliz area. He managed to get just under $5 million for the residence, although the most notable detail of this real estate deal was who Gary was selling to. The buyer who picked up the $5 million bill was none other than Vanessa Hudgens, along with her partner Austin Butler.

The 3,200-square-foot home features a detached two-car garage and a swimming pool, among other highlights. Oldman originally purchased the property back in 2011 for $2.9 million, leaving him with a healthy profit margin when the deal was completed. After selling the home, Gary was rumored to have relocated to Palm Springs. 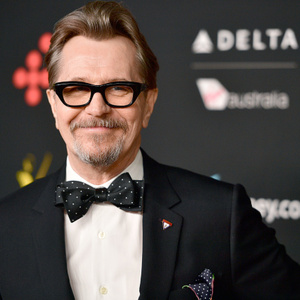