How much is Gary Cooper Worth?

Gary Cooper net worth: Gary Cooper was an American actor who had a net worth equal to $100 million at the time of his death in 1961 (after adjusting for inflation). Gary Cooper was born in Helena, Montana in May 1901 and passed away in May 1961. His acting career began in 1925 near the end of the silent film era. Cooper started out as an extra and a stunt rider. His first "talkie" role came in The Virginian in 1929 which catapulted him into the spotlight. Cooper would go on to star in several movies including A Farewell to Arms, The Lives of a Bengal Lancer, Mr. Deeds Goes to Town, Meet John Doe, Sergeant York, The Pride of the Yankees, For Whom the Bell Tolls, The Fountainhead, High Noon, Friendly Persuasion, Man of the West, and more. In 1937 he overtook Mae West to become the highest paid actor in the world with earnings that year of $370,000, which is the same as around $6 million today. In 1939, the US Treasury reported that Gary Cooper was the highest wage-earning person in the entire country, having earned $482,000 the previous year. That's the same as $8.6 million in today's dollars. Following the advice of his friend James Stewart, Cooper often took lower salary on films in exchange for a percent of profits. This strategy resulted in some fairly large paydays. For example, he earned a total of $1.4 million for his role in the 1954 movie Vera Cruz. That's the same as $13 million today. He finished his career with 117 acting credits. Cooper won Academy Awards for Best Actor in a Leading Role for Sergeant York and High Noon. He received a star on the Hollywood Walk of Fame at 6243 Hollywood Blvd. Gary Cooper passed away on May 13, 1961 at 60 years old from cancer. 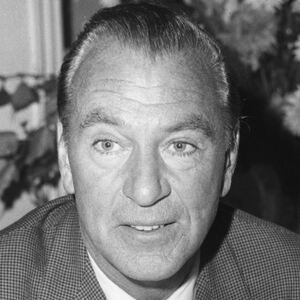