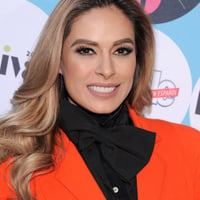 Galilea Montijo Net Worth: Galilea Montijo is a Mexican actress, model, and comedian who has a net worth of $8 million. Born in Guadalajara, Jalisco, Mexico, in 1973, Galilea Montijo won the 1993 competition "La Chica TV", which launched her on-screen career. She landed several parts starring in a variety of telenovelas, including 1995's "El premio mayor", 1996's "Azul", 1999's "Tres mujeres", 2000's "El precio de tu amor", 2006's "La Verdad Oculta", and 2010's "Hasta que el dinero nos separe". Montijo landed the hosting gig for "VidaTV", a position she held from 2001 until 2005. She appeared on the reality TV competition "Big Brother VIP" in 2002 and won the grand prize, and in 2005, she took part on "Bailando por un Sueno". She has also hosted "Teleton Mexoamerica", "Pequenos Gigantes", "Pequenos Gigantes 2", "Cuanto Queres Perder?", "La hora de la Papa", and "Buscando a Timbiriche, La Nueva Banda". Montijo currently hosts the morning TV show "Hoy". She has been romantically linked to several high-profile individuals, including Silvio Fornaro during the mid-'90s, Cuauhtemoc Blanco from 2003 until 2006, and Jorge Krsovsky from 2009 until 2011. Montijo has been married to her husband, Fernando Reina Iglesias, since 2011. She has one child, Mateo Reina Montijo, born in 2012.