How much is G. Hannelius Worth?

Genevieve Hannelius net worth: Genevieve Hannelius is an American actress and singer-songwriter who has a net worth of $1 million. Genevieve Hannelius was born in Boston, Massachusetts in December 1998. She started acting at a young age and starred in Children's Theater. Hannelius has studied at the Young Actor's Studio in Los Angeles, California. In 2009 she starred as Courtney Patterson in the television series Surviving Suburbia. In 2009 she starred in the TV series Rita Rocks as Brianna Boone. From 2009 to 2010 Hannelius starred as Amy Little in the series Leo Little's Big Show. From 2009 to 2010 she starred as Dakota Condor in the television series Sonny with a Chance. She is best known for starring as Avery Jennings in the TV series Dog with a Blog since 2012. She has starred in the movies Black & Blue and The Search for Santa Paws and has voiced roles for the films Spooky Buddies, Treasure Buddies, Santa Paws 2: The Santa Pups, and Super Buddies. She has released several albums and songs as a singer and does nail art tutorials on her YouTube channel GbyGNailArt. She has also launched customized nail wrap app called Make Me Nails. 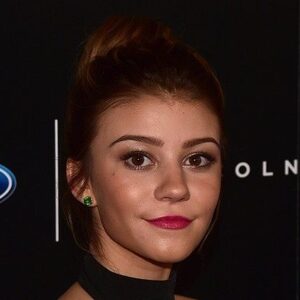