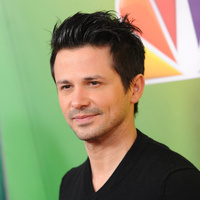 Freddy Rodriguez net worth: Freddy Rodriguez is s an American actor and producer who has a net worth of $3 million dollars. Freddy Rodriguez was born on January 17, 1975 in Chicago, Illinois to Puerto Rican parents. He was raised Roman Catholic and discovered a theater program for inner-city kids when he was 13-years old. He is a graduate of the drama program at Lincoln Park High School where he appeared in more than a dozen plays, including "To Kill a Mockingbird", "Twelve Angry Men", "The Crucible", "A Midsummers Night's Dream" and "The Lottery.". Rodriguez's first recognizable roles in films came in 1995 in "A Walk in the Clouds" with Keanu Reeves and as a Vietnam veteran in "Dead Presidents. Rodriguez went on to play a obnoxious jock in "Can't Hardly Wait" and had a recurring role the television show "Scrubs" as Carla's brother Marco. Rodriguez is best known for playing the characters Hector Federico "Rico" Diaz on HBO's "Six Feet Under" and El Wray in Robert Rodriguez's "Planet Terror". In 2007 he was a recurring cast member on the series "Ugly Betty" as Giovanni "Gio" Rossi. He most recently played the character of CIA special operative Rick Martinez on the CBS show "CHAOS". He has been married to his high school sweetheart Elsie Rodriguez since 1995. The couple has two children.