How much is Frankie Grande Worth?

Frankie Grande net worth: Frankie Grande is an American actor, Broadway dancer, YouTube personality, and reality television personality who has a net worth of $1.5 million dollars. Frankie Grande, also known as Frank James Michael Grande-Marchione was born in New York, New York, and grew up in Englewood, New Jersey, and Boca Raton, Florida. His younger sister is pop star Ariana Grande. He went on to graduate from Muhlenberg College, where he triple majored in Biology, Theatre, and Dance. He originally intended to focus on a career in marine biology, but was cast as "Boots the Monkey" in the national tour of Dora the Explorer Live right out of college. After the tour, he moved back to New York City, where he was quickly cast in the Broadway production of Mamma Mia. He began producing Broadway shows in 2009, and went on to produce Hamlet, La Bete, and Born Yesterday. He discovered a love of hosting and launched his own popular YouTube channel called FrankieJGrande. He joined the cast of Big Brother in 2014, and learned that his grandfather passed away during filming of the show. As of July 2014, Grande had over 200,000 YouTube subscribers with more than 10 million views, and more than 500,000 followers each on Twitter and Instagram. He is openly gay and living in New York City. 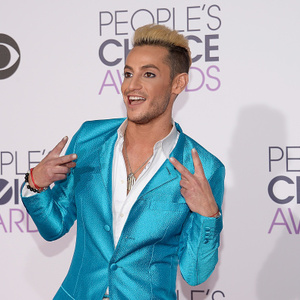