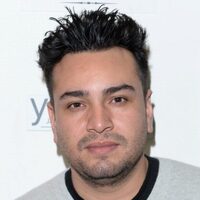 Frankie Delgado net worth: Frankie Delgado is an American reality television star who has a net worth of $500 thousand dollars. Frankie Delgado first gained notice appearing on the popular MTV reality series, "The Hills", from its second season until its sixth, and final, season in 2010. He was not a featured performer, but he appeared in almost every episode, and was often credited as one of the principal cast members' friends. He was listed as "Spencer's Friend", then "Lauren's Friend", and, ultimately, "Brody's Friend". He recently made headlines when he proposed to his longtime girlfriend, Jennifer Acosta, while the two were vacationing in Cabo, Mexico. He then returned to Los Angeles, and celebrated with former "The Hills" cast mate, Brody Jenner, and mutual friend, Evan Ross. Mr. Delgado has not attempted to spin his stint on "The Hills" into another reality program as many of his co-stars did, but he has gained a reputation around Hollywood for using his moderate fame to his advantage. In 2019 Frankie returned to MTV as a cast member of The Hills: New Beginnings.