Frank Grillo Net Worth and Salary: Frank Grillo is an American actor and producer who has a net worth of $6 million dollars. Frank Grillo is best known for his role as Brock Rumlow in Captain American: The Winter Soldier (2014) and for his roles in Warrior, (2011), The Grey (2012), End of Watch (2012) and The Purge: Anarchy (2014).

He was born on June 8, 1963 in New York City, New York. Frank, the oldest of three children, began acting in high school plays but was also a star athlete and dreamed of playing professional sports. His parents encouraged him to go to college first so Frank attended and graduated from New York University with a degree in business. He worked on Wall Street for about a year before a chance meeting with a casting director landed him a part in a beer commercial for Miller Genuine Draft. Frank would go on to appear in at least 25 commercials before landing a role on the daytime soap opera "The Guiding Light" (1996-1999) as character Hart Jessup, during which time his ad for Sure deodorant was airing simultaneously.

After leaving "The Guiding Light" in 1999, Frank landed roles in pilots such as "Fiona" and "Legacy" as well as roles in "Wasteland", "Battery Park" and "For the People". He appeared in several episodes of "The Shield" and had a starring role as Detective Marty Russo on "Blind Justice". Between 2005 and 2006 Frank appeared in 18 episodes of "Prison Break". Between 2014 and 2017 he appeared in 40 episodes of "Kingdom".

Frank's first marriage lasted from 1991 to 1998 and produced one son. He married actress Wendy Moniz in 2000. They announced their separation in 2020. They have two children together. 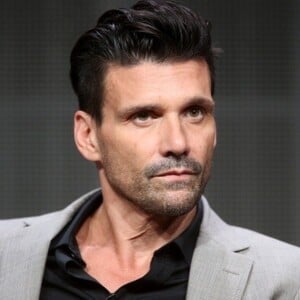