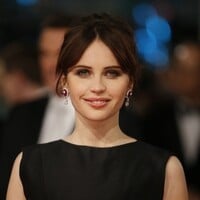 Felicity Jones net worth: Felicity Jones is an English actress who has a net worth of $6 million. She is best known for her roles in Rogue One, The Archers and for playing the school bully "Ethel Hallow" in the first series of The Worst Witch and its sequel Weirdsister College. She was born in 1983 in Bournville, an affluent suburb of Birmingham. Her parents met while working at the Wolverhampton Express and Star. Her father was a journalist and her mother was in advertising. Jones was encouraged to take up acting by her uncle, actor Michael Hadley. Her first big roles were included her work in The Worst Witch, Weirdsister College, and her longest and probably best known role overall in the BBC Radio 4 soap opera The Archers, where she played "Emma Carter". Her mother was also passionate about film and theatre. She began acting at 11 years at an after-school workshop funded by Central Television.In 2011, she appeared in the drama Like Crazy opposite Anton Yelchin and in the romantic comedy Chalet Girl. On radio, she played the long-running role of "Emma Grundy" in The Archers. Jones also co-starred in Ricky Gervais and Stephen Merchant's feature Cemetery Junction. In 2014, she appeared as "Felicia Hardy" in The Amazing Spider-Man 2 and starred as "Jane Wilde Hawking" in The Theory of Everything for which she received critical praise and several award nominations, including Golden Globe, BAFTA, Screen Actors Guild and Academy Award.