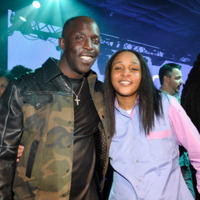 Felicia Pearson net worth: Felicia "Snoop" Pearson is an American actress, rap artist, and author, who has a net worth of $50 thousand dollars. Born in Baltimore, Maryland, Felicia Pearson was brought up in a very rough living situation. Her mother was a crack addict and her father was a stick-up man. She lived with a foster family for a time, and then turned to drug dealing. She went to prison for six and a half years, after being convicted of second-degree murder when she was fourteen years old. She earned her GED while she was incarcerated. She met Michael K. Williams who played Omar Little on "The Wire", while hanging out in a club in Baltimore. He introduced her to the writers and producers of the series, and after an audition process, she began appearing on the show as the character, Felicia "Snoop" Pearson. In addition to her work on "The Wire", she was also featured on the track, "It's A Stick Up", and she wrote the memoir, "Grace After Midnight", about her early childhood experiences.