What is Evan Rachel Wood's Net Worth and Salary?

Evan Rachel Wood is an American actress and musician who has a net worth of $8 million. Evan Rachel Wood has appeared in numerous films and television series. After getting her start on the shows "American Gothic" and "Once and Again," she went on to earn acclaim for her performances in the films "Thirteen," "Pretty Persuasion," and "Across the Universe." Wood's other credits have included the films "The Wrestler" and "The Ides of March," and the television series "True Blood," "Mildred Pierce," and "Westworld."


Evan Rachel Wood was born on September 7, 1987 in Raleigh, North Carolina to actor and director parents Sara Lynn Moore and Ira David Wood III. Her mother, who had converted to Judaism, raised Wood and her brothers in the Jewish faith. Growing up, the children were all actively involved in Theatre in the Park, a local community company of which their father was the executive director.

Wood made her professional acting debut as a kid in 1994, appearing in two television films, "In the Best of Families: Marriage, Pride & Madness" and "Search for Grace." She was in two more television films the next year called "A Father for Charlie" and "Death in Small Doses." From 1995 to 1996, Wood appeared in three episodes of the CBS horror series "American Gothic." Following the separation of her parents in 1996, she moved with her mother to the Los Angeles area. There, she was homeschooled, and received her high school diploma.

In 1997, Wood made her big-screen debut with a starring role opposite Kevin Bacon in Timothy Hutton's drama "Digging to China." The next year, she had a supporting role in the fantasy romcom "Practical Magic," starring Nicole Kidman and Sandra Bullock. As a teenager, Wood starred in the 2001 dramedy "Little Secrets," playing an aspiring concert violinist. She followed this with a supporting role in the science-fiction film "Simone," starring Al Pacino. In 2003, Wood had her breakthrough role as a promiscuous, drug-addled teen in the independent drama "Thirteen." For her performance, she received Golden Globe and SAG Award nominations for Best Actress. Wood appeared in a number of other acclaimed independent films over the subsequent years, including Ron Howard's Western "The Missing"; the black comedy "Pretty Persuasion"; the romantic dramedy "The Upside of Anger"; the neo-Western "Down in the Valley"; and the dramedies "Running with Scissors" and "King of California."

In 2007, Wood lent her voice to the animated science-fiction film "Battle for Terra." Her biggest role that year was in Julie Taymor's jukebox Beatles musical "Across the Universe," in which she starred opposite Jim Sturgess. Wood was subsequently in the thriller "The Life Before Her Eyes" and the sports drama "The Wrestler," in which she played the estranged daughter of Mickey Rourke's titular character. Following this, she costarred in the 2009 Woody Allen comedy "Whatever Works." Her subsequent credits were "The Conspirator," "The Ides of March," "Charlie Countryman," "A Case of You," and "Barefoot." In 2015, Wood starred in the apocalyptic drama "Into the Forest," and lent her voice to the animated jukebox musical "Strange Magic." A few years later, she voiced the character Queen Iduna in the Disney animated sequel "Frozen II." Wood's other credits have included the psychological thriller "Allure," the crime dramedy "Kajillionaire," and the romantic musical "Viena and the Fantomes." 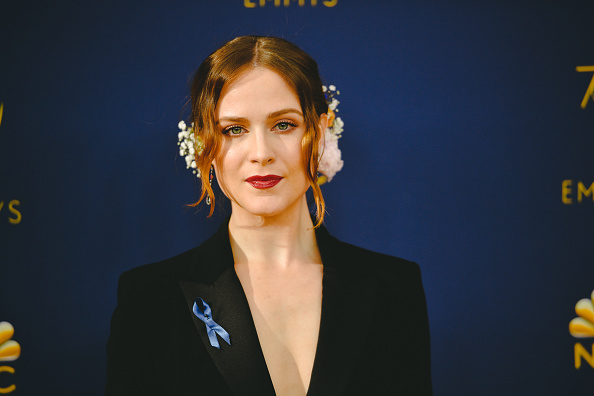 In between roles in the television films "Get to the Heart: The Barbara Mandrell Story" and "Down Will Come Baby" in the late 90s, Wood appeared in six episodes of the crime drama series "Profiler." She had her breakthrough television role in 1999, when she began playing the main character of Jessie Sammler on the ABC series "Once and Again." The show ran for three seasons through 2002. During this time, Wood appeared in episodes of "Touched by an Angel" and "The West Wing." Later, from 2009 to 2011, she played the recurring role of Sophie-Anne Leclerq in the second and third seasons of the HBO fantasy horror series "True Blood." Also in 2011, Wood gave one of her most acclaimed performances in the miniseries adaptation of "Mildred Pierce"; for her performance as eldest daughter Veda Pierce, she received an Emmy Award nomination for Outstanding Supporting Actress in a Miniseries or Movie.

In 2013, Wood lent her voice to characters on the stop-motion sketch comedy series "Robot Chicken." Two years later, she had a recurring role on the British comedy series "Doll & Em." Wood landed one of her biggest television roles yet in 2016, when she began playing sentient android Dolores Abernathy on the HBO science-fiction Western series "Westworld."

As a musical artist, Wood sang "I'd Have You Anytime" on the fourth CD of the Amnesty International benefit album "Chimes of Freedom." From 2016 to 2017, she performed alongside Zach Villa as part of the electro-pop duo Rebel and a Basketcase. Subsequently, in 2018, she formed the cover band Evan + Zane with Zane Carney. The next year, Wood appeared on the Billboard Hot 100 with the song "Show Yourself," a duet with Idina Menzel from the soundtrack to "Frozen II."

In 2005, Wood dated actor Jamie Bell. She subsequently dated musician Marilyn Manson, to whom she got engaged in 2010; however, they ended their relationship before getting married. In 2011, Wood came out as bisexual, and rekindled her relationship with Bell. The two got betrothed in 2012, and had a son in 2013 before separating in 2014. Wood was next in a relationship with Zach Villa; they got engaged in early 2017 before calling it off later in the year.

Wood revealed to a Rolling Stone reporter in 2016 that she had been raped twice in the past. In 2018, she testified before the United States House Judiciary Subcommittee on Crime, Terrorism, Homeland Security and Investigations to promote the Sexual Assault Survivors' Bill of Rights Act. The next year, Wood testified before the California Senate to help pass the Phoenix Act, which extends the statute of limitations in cases of domestic violence. Later, in 2021, Wood revealed that one of her abusers was Marilyn Manson. 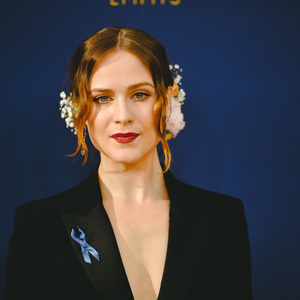