What is Eugene Levy's Net Worth?

Eugene Levy is a Canadian actor, comedian, singer, and writer who has a net worth of $30 million. Eugene Levy is probably most famous for appearing in the "American Pie" movie franchise and the television series "Schitt's Creek". He co-created Schitt's Creek with his son Dan Levy, who also stars in the show.

Eugene Levy was born in Hamilton, Ontario, Canada, on December 17, 1946 to Rebecca Kudlatz, a homemaker who was born in Glasgow, Scotland and later immigrated to Canada, and David Levy, a foreman at an automobile plant. He has one brother, Fred. He attended McMaster University where he was part of a student film group called McMaster Film Board. It was in this film group where he met future movie collaborator Ivan Reitman.

From 1972-1973, Eugene Levy was involved in the Toronto production of the hit musical "Godspell" at the Royal Alexandra Theatre. This fateful musical ended up launching the careers of many actors, entirely local performers including the likes of Gilda Radner, Martin Short, Andrea Martin, and several others, including the show's musical director, none other than Paul Shaffer. After the production became overwhelmingly popular, the show moved uptown to the Bayview Playhouse in Leaside. Intended to only be a handful of performances at first, the popular show ended up running for a then-record of 488 performances.

Levy has been featured prominently in several dozens of films, although he's only truly "starred" in two films: "Armed and Dangerous" in 1986 and 2005's "The Man." His very first film was a minor part of Coffee Boy in 1971's "Foxy Lady." Throughout the 1980s and early 90s he appeared as a guest star in many comedies including classics like "National Lampoon's Vacation", "Splash," "Club Paradise," "Stay Tuned," "Serendipity,"  "Father of the Bride" and "Father of the Bride II".

In 1996, Levy appeared in "Waiting for Guffman". He was also a writer on "Guffman" which was directed by Christopher Guest. Eugene would go on to make memorable appearances in and co-write other Guest films including 2000's "Best in Show" and 2003's "A Mighty Wind." The latter, in which he played Mitch Cohen, an emotionally unstable folk singer, won him many accolades including a Satellite Award for Best Supporting Actor in a Musical or Comedy and the prestigious New York Film Critics Circle Award for Best Supporting Actor. Levy was also the creator of "Maniac Mansion," a TV sitcom based on the LucasArts video game of the same name.

Eugene truly became a household name in 1999 after appearing as Jason Biggs' father in the comedy "American Pie". Eugene would go on to appear in eight more installments of the "American Pie" franchise, including several that were Direct-to-DVD. He is the only original "Pie" actor to appear in all eight. He earned $1 million for his appearance in the first installment, $3 million for the second and $5 million for the third. It's not known what Eugene made for Pie movies 4 – 8.

Levy went on to score roles in "Cheaper by the Dozen 2, "Bringing Down the House", "Like Mike", "Night at the Museum: Battle of the Smithsonian", "Goon" and "She's Funny That Way". In 2016, he voiced Charlie in "Finding Dory."

In 2015 Eugene and his son Dan co-created the sleeper hit television series "Schitt's Creek". Eugene stars as Johnny Rose, the head of the fallen-from-grace Rose family. The show filmed 82 episodes over six seasons between 2015 and 2020. Eugene and Dan also served as writers, stars and executive producers. Fred Levy, Eugene's brother, is a producer on the show. 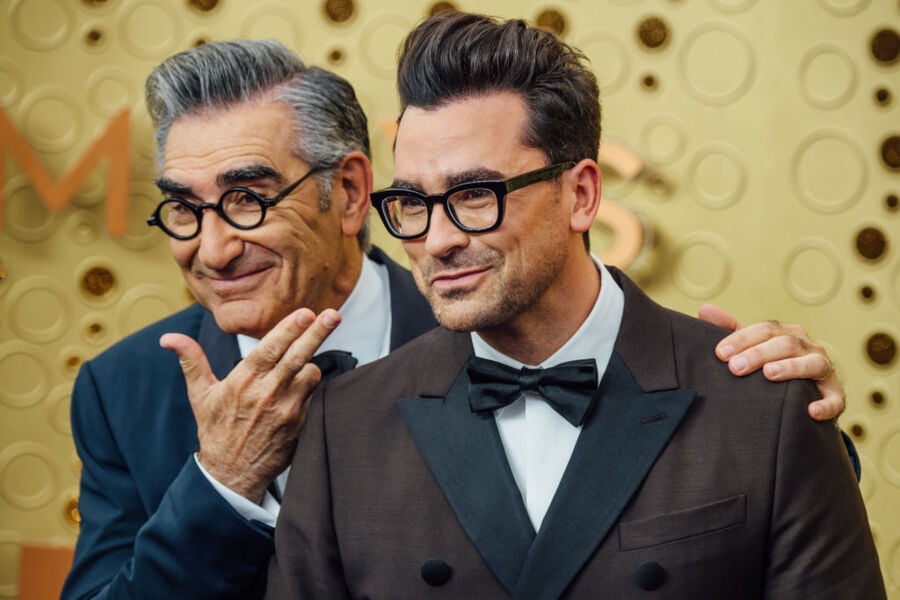 He has been nominated for dozens of awards, including a Grammy win for Best Song Written for a Motion Picture, Television or Other Visual Media for "A Mighty Wind". He earned a star on Canada's Walk of Fame and has won at least five Canadian Comedy Awards. Levy is a two-time Emmy Award winner for Outstanding Writing in a Variety or Music Program for his work on "SCTV Network 90".

In 2020, "Schitt's Creek" sixth and final season was nominated for an astounding 15 Primetime Emmy Awards. This broke the record for the most Emmy nods ever given to a comedy series in its final season. In an epic sweep, the show became the first ever comedy or drama series to sweep all four acting categories, including a win for both Levys–Eugene for Outstanding Lead Actor and Dan for Outstanding Supporting Actor). The show also took home the grand prize of Best Comedy Series.

Eugene has been married to writer Deborah Divine since 1977. They split their time between Los Angeles, Florida, and Canada. In addition to son Dan, they have a daughter named Sarah, who also plays the character of Twyla on "Schitt's Creek". He was extremely close friends with the late actor John Candy. Eugene and Dan's "Schitt's Creek" co-star Catherine O'Hara is a very close friend to the Levy family, and Eugene and Catherine have been co-stars for numerous years on various projects.

Levy is an outspoken advocate of autism awareness and treatment and is a member of the Canadian charity Artists Against Racism.

In 2006 Eugene and Deborah paid $2.4 million for a home in LA's Pacific Palisades neighborhood. They also reportedly own a home in Toronto, Canada. 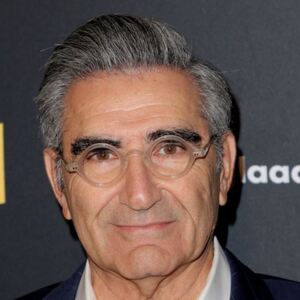