Esther Williams net worth: Esther Williams was an American actress and competitive swimmer who had a net worth of $40 million at the time of her death in 2013. Esther Williams was born in Inglewood, California in August 1921 and passed away in June 2013. She held multiple records and was a member of Billy Rose's Aquacade. She was unable to compete in the 1940 Summer Olympics due to World War II but was a commentator for the 1984 Summer Olympics. Williams starred in several movies including Andy Hardy's Double Life, A Guy Named Joe, Bathing Beauty, Thrill of a Romance, Ziegeld Follies, The Hoodlum Saint, Easy to Wed, Till the Clouds Roll By, Fiesta, This Time for Keeps, On an Island with You, Take Me Out to the Ball Game, Neptune's Daughter, Duchess of Idaho, Pagan Love Song, Texas Carnival, Skirts Ahoy!, Million Dollar Mermaid, Dangerous When Wet, Easy to Love, Jupiter's Darling, The Unguarded Moment, Raw Wind in Eden, The Big Show, Magic Fountain, and That's Entertainment! III. Esther Williams won two Golden Globe Awards and received a star on the Hollywood Walk of Fame in 1960 at 1560 Vine Street. She was married four times including to radio announcer Ben Gage and actor Fernando Lamas (father of Lorenzo Lamas). Ben Gage helped Esther established a business career that included a line of swimsuits, restaurants, swimming pools and more. Esther Williams passed away on June 6, 2013 at 91 years old. 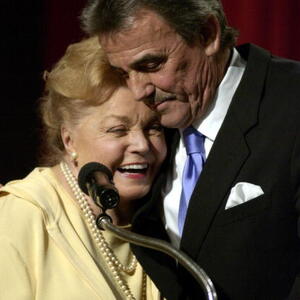